This is an online course without any physical meetings. You can study whenever you want using your own computer and internet access. The language of instruction is English. The course introduces the relevance of music in the study of archaeology. In a series of unique video lectures, you will meet Cajsa S. Lund, researcher and a specialist in music archaeology. You will study the source material and methodology applied in music archeology with special focus on Northern Europe. In addition, the studies cover source-critical issues related to music archeology. During the course, you will be able to see and listen to authentic performances of music.

A pioneer in the field of music archaeology

Listen to the bone whistle from the Viking era

Read more about the four lectures included in the course.

This is a general introduction to prehistoric sound worlds in the remote past and to music archaeology, the multidisciplinary field of research that attempts to answer questions about our oldest music and sound history. There is a large number of exciting questions. What clues to ancient sound worlds do we have? What was our ancestors’ relation to natural sounds? What sounds did people produce themselves? When were these sounds produced, why, and in what contexts? Is it at all possible to provide any satisfactory answers to such questions? The terms ”music/musical instruments” in relation to ”sound/sound tools” are also discussed.

The main source consists of archaeological finds of musical instruments and other sound tools, intact or in fragmented form. Another source is preserved contemporary iconographic material, such as images of musical instruments.There are also sporadic mentions of singing, playing, and other sound production in early written sources with links to ancient Scandinavia. The lecturealso includes an excursus on ringing stones.In addition,”green music” is discussed, Cajsa S. Lund’s overall term for supposedly lost finds –sound instruments made of perishable material that were most likely used in ancient times but have not been preserved.

3. Finds, Use and Function

This lecture will demonstrate replicas and reconstructions of music-archaeological finds in northern Europe and discuss their possible use and function. Cajsa S. Lund divides all finds into five groups according to their probability of having been used for sound production. Group 1 includes objects that clearly are sound tools, such as bells and lyres. Others are possible sound tools on a diminishing scale. Group 5 includes objects with the lowest degree of probability. Wind instruments, stringed instruments, and different percussion instruments will be presented, some of them live.

The Viking Age (ca. 700–1100 AD) is the last period of the Nordic prehistory, seen from a general Nordic archaeological perspective. What sort of music did the Vikings play? Hasany Viking music been preserved? Our knowledge of music and soundscapes in the Viking Age, as in ancient Scandinavia in general, is primarily based on archaeological finds of musical instruments and other sound tools – and there are many such finds preserved dated to the Viking period. Their possible use and role, in everyday life and in ritual contexts, will be discussed. The lecture will also discuss the ”listening Viking” and include an excursus on Norse Gods and music.

Distance – study where you are

Perhaps you would like to study in the Swedish mountains, in a big city, or at home close to family? Many of our programmes and courses are offered in distance format.

Studying at a distance can be done in different ways, either entirely without physical gatherings or with only a few gatherings on campus or at one of our learning centres. The common denominator is that a large part of your studies takes place online. You communicate with the teacher and other students with the help of a learning platform with discussion forums, group work, recorded lectures and video meetings.

The benefit of distance studies is the flexibility, something that is valuable if you want to be free to decide when and where you want to study. Some compulsory elements on you course or programme may take place during office hours, even though they are online.

Learn more about studying at a distance. 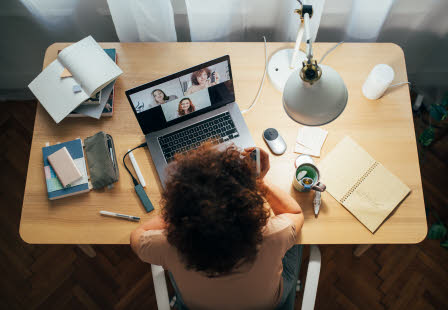 Build your own degree