In 1818, Sweden's first paddle steamer, Amphitrite, sailed on Lake Mälaren between the cities of Stockholm, Västerås and Uppsala. That same year, Emanuel Ingelström was born.

23 years later, he began studying to become a Master Mariner at Kalmar Maritime Academy, then called the Navigation School. After a year of study, Emanuel and his five classmates graduated in the very first class at this school.

Emanuel, the class valedictorian, had the honor of receiving the very first diploma issued by the school, on the 2nd of May, 1843. We still have the school's copy of that document, as shown in the photo below. 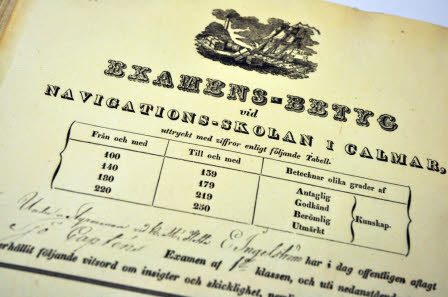 In addition to the 700 prospective Master Mariners, Chief Engineers, Operating Technicians, and engineers that we have every year, almost as many students attend courses at Kalmar Maritime Academy.

The programs at Kalmar Maritime Academy are strongly focused on practical skills and training.Students at KMA learn a great deal of theory, while at the same time applying those theories in training practices. KMA has many continually updated simulators for this purpose.

The research in the subject maritime science has three directions: working life, organisation and risk management, the environmental impact and marine planning of shipping, and energy efficiency. Read more at the website of the Maritime Science research group.