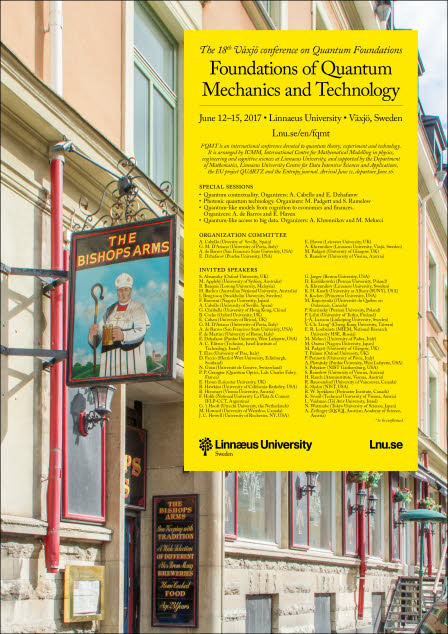 The Foundations of Quantum Mechanics and Technology (FQMT) conference is arranged by International Centre for Mathematical Modelling in physics, engineering and cognitive sciences (ICMM) at Linnaeus University in Växjö, Sweden. This is the 18th Växjö conference devoted to quantum foundations and applications of quantum theory, especially quantum information. It is devoted to quantum foundations (including philosophical issues), experiment, and recently developed quantum technologies (with emphasize of their foundational aspects). The conference is supported by the Department of Mathematics at Linnaeus University, Linnaeus University Centre for Data Intensive Sciences and Applications, the EU project QUARTZ and the Entropy journal.

The last years have been characterized by a tremendous development of quantum technologies and related theoretical studies. In particular, EU recently launched quantum technologies as a flagship. It was pointed out in an EU manifesto: “Quantum theory which was developed in the early 1900s by Plank, Bohr, Feynman and Einstein has fundamentally changed our understanding of how light and matter behave at extremely small scales. Our ability to manipulate quantum effects in customised systems and materials is now paving the way for a second quantum revolution.”

At the same time, the foundational basis of this revolution is still not concrete and contains a few sandy and shaky slices. Therefore, the studies in quantum foundations nowadays are not less (but may be even more) important than 100 years ago when quantum mechanics was born.

Quantum Contextuality in Quantum Mechanics and Beyond, to be held 4-5 June 2017 in Prague, Czech Republic.

The conference will take place at the campus of Linnaeus University in Växjö during the period June 12-15, 2017 (arrival June 11, departure June 16). The last conference day will be the intensive conference day, with a planned ending at 18.30.