The conference Towards Ultimate Quantum Theory (UQT) is arranged by International Centre for Mathematical Modelling in physics, engineering and cognitive sciences (ICMM) at Linnaeus University in Växjö, Sweden. This is the 19th Växjö conference devoted to quantum foundations and applications of quantum theory, especially quantum information and probability. It is devoted to quantum foundations (including philosophical issues), experiment, and recently developed quantum technologies (with emphasize of their foundational aspects). 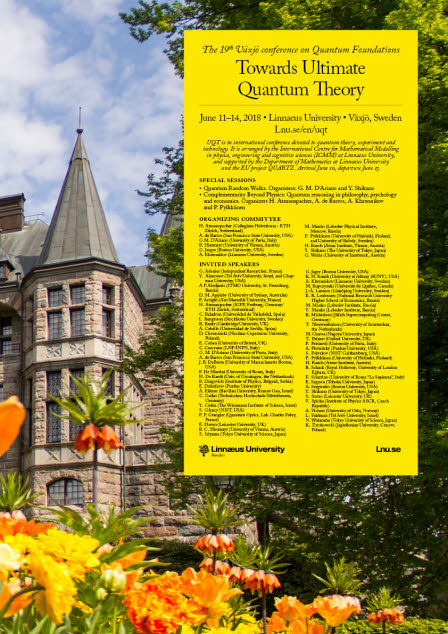 In spite of its tremendous success (both theoretical and experimental), the present quantum theory cannot be considered as the ultimate theory of micro-phenomena. It suffers of a variety of fundamental problems. Quantum mechanics is a nonrelativistic theory and its relativistic generalization, quantum field theory, suffers of divergences. But, of course, the biggest black cloud on the quantum sky is the impossibility to unify presently existing quantum theory with general relativity. The conference will be devoted to searching of new ways to creation of the ultimate quantum theory. However, since this project can take very long time (and even it may happen that is would be never finished), the conference also covers all traditional foundational topics: interpretations, mathematical apparatus, experiment, philosophy.

Poster session will play a more important role than during the previous conferences. In particular, journal Entropy supports the awards for the two best posters, 350 and 150 Swiss francs, respectively. Participants giving oral talks (invited and contributed) can also submit additionally posters. Abstracts of invited and contributed talks and posters can be submitted during the process of registration. Abstracts of contributed talks and posters will be evaluated and the authors will receive emails about consideration of their contributions.

Conference proceedings will be published as the special issue of "Entropy", see www.mdpi.com/journal/entropy/special_issues/uqt (Unfortunately, there is the open access fee).

The conference is supported by the Department of Mathematics at Linnaeus University and the EU project QUARTZ. Fetzer Pioneers Award for 2018 to prof. Khrennikov (in recognition of the pioneering work he is doing) will be used to support the conference.

Use the the following links to find the conference program and the abstracts (as pdf files):

The deadline for abstract submission was April 20. [For a contributed talk, one can first submit the abstract via the registration and the fee can be paid later.]