A new micrometre-thin film that can provide hard coating for smartphones, tablet computers and vehicles has been developed by researchers from Linnaeus University and Linköping University. Ordinary window glass can be made three times harder by using the film.

The research team within glass technology at Linnaeus University has – in collaboration with Linköping University where the equipment is located – developed a completely new material. The material has the form of so-called thin films, which are less than a micrometre (one-thousandth of a millimeter) thick.

Chemically, the films consist of the elements silicon, oxygen and nitrogen – for which there is reported research – and one additional element: magnesium.

"It is the combination of these four elements that give the film its interesting properties, while still letting through visible light", explains associate professor Sharafat Ali, who is the project manager. 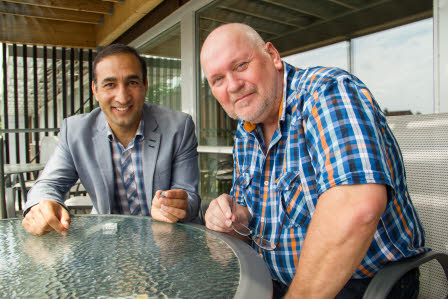 The film is produced at very low pressure using pure chemicals and a technology called magnetron sputtering. It can then be added to various types of thicker materials. It has been of particular interest for the research to apply the film to ordinary window glass. This considerably improves the refractiveness of the glass and, most importantly, makes the glass up to three times harder than untreated window glass. Therefore, the new material will be of interest for use in, for instance, vehicles, smartphones and tablet computers.

"Our research results have recently been published as so-called 'rapid communication' in the scientific journal Vacuum. For once, the publication took less than a week and there were no corrections of the manuscript", says professor Bo Jonson.

The project has been managed by associate professor Sharafat Ali with the support of professor Bo Jonson – both active at the department of built environment and energy technology at Linnaeus University – in collaboration with, among others, associate professor Per Eklund and professor Jens Birch at the department of thin film physics at Linköping University. This is a continued development of the research Sharafat Ali did for his doctoral thesis, which contained studies of synthesis of nitrogen-rich glass, a process that requires both special equipment and experience. The research has to a large extent been funded by grants from the Åforsk foundation and the innovation agency Vinnova.