A collaboration between researchers from China and Linnaeus University recreates vegetation cover history dating millennia back, in order to make it possible for the climate models of today to become better at predicting how human activities can affect the climate of the future. On December 16, Furong Li defended her doctoral thesis Pollen productivity estimates and pollen-based reconstructions of Holocene vegetation cover in northern and temperate China for climate modelling in which she has reconstructed land vegetation in parts of China during the last 11,000 years.

Climate models of today deal with vegetation and its interplay with climate, but the models only simulate the natural, climate-controlled vegetation. For vegetation that has been created by man (like deforestations, agricultural land and pasture land) the climate models use model-based scenarios. Professor Marie-José Gaillard investigates environmental history and vegetation cover over long time perspectives using plant pollen that has been preserved in lake sediment and peat bogs.

"By providing the climate models with information about how man has affected the vegetation cover thousands of year back, the models will become much better at simulating climate and predicting how the human impact will affect the climate of the future", explains Marie-José Gaillard.

"Human use of land affects the carbon dioxide balance in the atmosphere, but also the heat exchange between Earth and the atmosphere. Thus, a coniferous forest is not only a carbon sink (stores carbon dioxide from the atmosphere through photosynthesis) but also a heat source. These two processes result in opposite effects temperature-wise. The net result is still unknown, which means that we still do not know whether the planting of forest always has a positive effect on global heating", Marie-José Gaillard says.

Therefore, reconstructions of ancient vegetation cover on Earth are very much in demand by the climate modelers. By studying plant pollen that has been preserved in lake sediments and peat bogs it is possible to reconstruct both the natural and the man-made vegetation.

"By, for instance, calculating how widespread different types of plants were in an area, we can use climate models to study how human use of land affected the climate in ancient times", explains Marie-José Gaillard.
Together with colleagues from other countries, researchers at Linnaeus University have developed a model for calculating the vegetation cover in ancient times based on pollen. The method "translates" pollen data to land vegetation.

Since a couple of years back, there is a reconstruction for the land surface for a large part of Europe during the last 11,000 years. It was published by doctoral students Anna-Kari Trondman and Marie-José Gaillard together with a large number of other European researchers.

"In order for us to be able to use this data in global climate models, corresponding reconstructions are necessary throughout the world. Colleagues in the US, Central and South America, Africa and Asia are working on this", says Marie-José Gaillard.

In her dissertation, Furong Li has reconstructed the land vegetation in northern and temperate China, going back 11,000 years and up until today. She did this by using the same methods that have previously been used in Europe. The results showed that humans have had an impact on the vegetation cover through deforestation since 7,500 years back. Deforestation then gradually increased until about 2,000 years ago, when it was roughly as extensive (or even more extensive) than it is today.

Furong Li's reconstructions show that the scenarios for human deforestation that is used in the climate models often underestimate the extent of deforested areas in ancient times. This means that they must be adjusted in order to be useful for climate modelling purposes. In addition, the pollen-based reconstructions can be used by climate modelers, instead of the simulated scenarios.

As a contribution to the international research project PAGES (Past Global Changes LandCover6k) coordinated by Marie-José Gaillard, and thanks to an exchange project funded by STINT, Marie-José Gaillard and doctoral student Furong Li have, together with Chinese colleagues, carried out a corresponding reconstruction for the temperate regions of China. As a result of this close collaboration, China is important in the study f a group of Chinese researchers are now visiting Sweden. They are here to learn about the model and how to use it.

"We have a great collaboration. We want to use this model throughout China and we are now building our knowledge and expertise within the field", says professor Qinghai Xu from Hebei Normal University, Shijiazhuang, China.

"China is important in the study of the relationship between climate and land use since the country has a particularly long history of human impact on the environment", Marie-José Gaillard concludes.

Traditional cultural landscape in Shandong province, south of Beijing, China. Cultural landscape consisting of cultivated fields on terraces, forest with pine tree, oak, chestnut trees and Robinia, and pasture land on the top of the mountain. 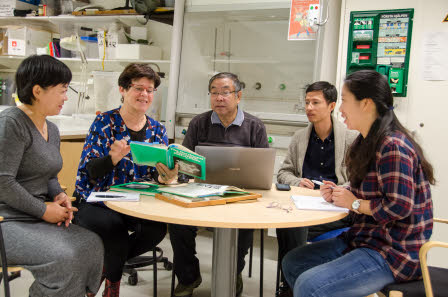