Dr Darek Haftor, professor at Linnaeus University and the first Director of the new Gunilla Bradley Centre explains why the centre is much needed:

– The Gunilla Bradley Centre for Digital Business brings together researchers from various disciplines aimed to produce novel understanding of the new reality out there: digital businesses. The Centre is named after Dr Gunilla Bradley, professor emerita at the Royal Institute of Technology, Sweden. Gunilla was born in Småland where Linnaeus University operates, and was a world pioneer with her research that already in 1970's focused on how digital technologies influence workplaces. This sprit of pioneering research on the use of digital technologies guides the centre researchers.

The Gunilla Bradley Centre was inaugurated with two open seminars, one in Växjö and one in Kalmar, on January 21st and 22nd 2016. These were composed of several talks starting with Dr Darek Haftor, professor at Linnaeus University and the first Director of the centre. His talk gave the motivation for why yet another research centre is needed in Sweden. Then Dr Anita Mirijamdotter, professor at Linnaeus University, introduced and summarised the pioneering research profile of Dr Gunilla Bradley, professor emerita at the Royal Institute of Technology, whose name is assumed by the new Centre.

Thereafter, Dr Bradley gave a short lecture on her view of the digitalisation of societies, as based on her lifelong research and her so-called "convergence model". Following that, Dr Rana Mostaghel and Dr Pejvak Oghazi, researchers at Linnaeus University, gave a short overview of current research projects conducted by researchers at the centre.

The inauguration seminars also featured much appreciated talks by two industry representatives. Mr Daniel de Sousa, CEO of Visma Spcs, presented his view on the future challenges of digital business while Mr Puria Sanae, Head of Flickr at Yahoo, came from Silicon Valley to present the process of digital business innovation as pursued at Yahoo. Dr Peter Aronsson, Professor and Pro-Rector at Linnaeus University, gave an important talk that detailed why transdisciplinary research centres are needed at a university and the centre's key function to link the university with realities outside it.

Finally, Mr Mehmet Kaplan, Sweden's Minister for Information Technology, travelled from Stockholm to Kalmar to inaugurate the Gunilla Bradley Centre and gave a much engaged speech that addressed the major role of digital technologies for Sweden's development as a society and the need for such research efforts as represented by the Gunilla Bradley Centre for Digital Business. 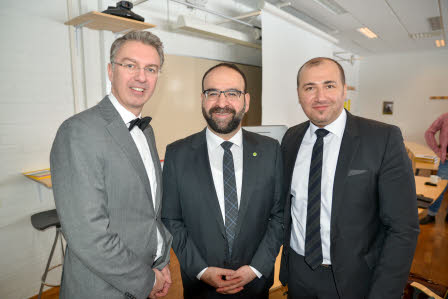 The only one of its kind in Sweden