To make use of a property with student apartments as a living lab, to use existing data to supplement current citizen surveys and to handle forestry data in real time – these are three areas where Linnaeus University Centre for Data Intensive Sciences and Applications finds possibilities for collaboration with industry.

During the first few months of 2017, Linnaeus University Center for Data Intensive Science and Applications (DISA) has worked for a strengthened collaboration with external partners. These efforts are beginning to bear fruit and concrete partnerships and joint exploration of ideas are being developed. 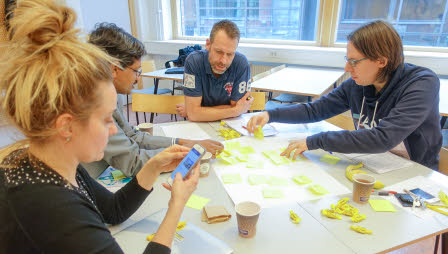 A large, new property is being built in the Docenten block near Linnaeus University. The ground floor will feature an ICA Kvantum grocer's store and above the store, three modules with a total of 248 student apartments will be built. On April 10, a workshop was arranged where Smart Housing, GodaHus and Växjö Municipality met researchers from Småland Living Lab, DISA and others that had shown interest. The focus of the workshop was the opportunities to use Docenten for research as a so-called Living Lab. The workshop resulted in two separate tracks with different types of measurements to pursue; both social and technical.

In March, two workshops were organized where researchers and external representatives met and discussed well-defined areas. The first workshop was together with Växjö Municipality on how to use existing data to supplement or replace the current citizen surveys. The dialogue was initiated and will soon result in a joint feasibility study.

The second workshop was organized in cooperation with Södra on real-time forestry data. Södra is facing a paradigm shift in which all the data that is available must be used in new, innovative ways. The workshop resulted in a closer cooperation that will be announced later on.

Do you have ideas with great research potential that you would like to discuss with researchers from different fields? Don't hesitate to contact Linnaeus University Centre for Data Intensive Sciences and Applications for an unbiased initial meeting.