Last Friday, Peter Aronsson was inaugurated as vice-chancellor of Linnaeus University. The day began with Aronsson giving an inauguration lecture in Kalmar. In the evening, the official ceremony was held in Växjö.

In connection to inauguration, the university invited the alumni who studied in Växjö during the years 1967–1977 for mingle and a guided tour on campus. Roughly 60 former students showed up and celebrated the fact that it has now been 50 years since Växjö became a university branch and 40 since Växjö and Kalmar became university colleges.

In his inauguration speech, Aronsson talked about three topics: What is Linnaeus University? What needs to be done in the next few years? How can this be done?

"Linnaeus University should be the primary source for the development of both society and individuals. We are not alone in this work, but we are a key player. In the age of fake news, knowledge must be the base for societal development", Aronsson pointed out.

"Expectations on us are great, and we are ready to meet these expectations. However, in order to succeed we must collaborate on many levels. We will establish creative and dynamic knowledge environments where we connect different subjects with each other, different types of learning, and work across the boundaries between the university and the surrounding society", Aronsson continued.

"We can come a long way with Linnaeus as a role model. I would like to deepen our link to him. Just like we are now, he was active in a wide range of fields. I would like to add to this the doubtful Linnaeus, who was somewhat afraid that he thought too much of himself, and that he would be punished for it", said Aronsson.

"But I would also like to mention a quote from Linnaeus. He said 'Do what your heart desires'. And I would really not want to be vice-chancellor anywhere else but here", Aronsson emphasised.

"I'm new, you're new, and together we can accomplish just about anything! We will make this the best university in the world and we need fantastic, competent students to develop the region", Aronsson concluded.

On Friday evening it was time for the official inauguration ceremony. Stephen Hwang, Linnaeus University's former vice-chancellor, was the officiant and he gave a speech to his successor:

"Your energy and your vision have already contributed to the further development of Linnaeus University. You are a true representative of the university's mottos 'Anything is possible' and 'Where knowledge grows'", Hwang continued.

"Your journey forward with Linnaeus University begins here and now. What you do will mean a lot to a lot of people. What you do now will make history", Hwang concluded. 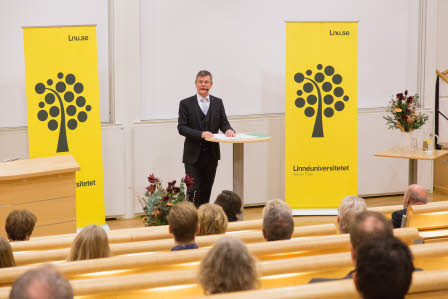 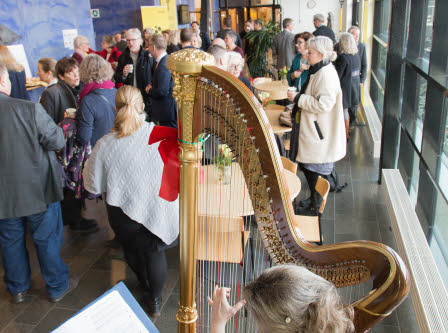 Mingle in connection to the inauguration lecture. 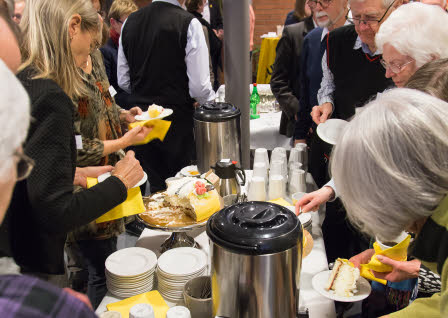 Cake mingle at the alumni event. 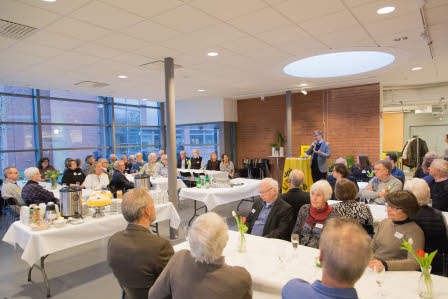 University director Per Brolin gives a talk about the present-day university to the former students.