With their interactive performance exhibition “Hurry up before we collapse”, the second-year students on the Design + Change programme received the award for sustainability project of the year at Stockholm Furniture Fair.

Hurry up before we collapse deals with the hidden power structures behind our consumption and the inevitable collapse towards which it is leading us. In the exhibition, the design students take on the role of human furniture as a way to interact with the visitor and encourage personal reflection concerning the role as consumer. An exhibition that drew attention and was awarded a Form Award 2019 in the category Sustainability Project of the Year.

“It feels great to win this award, it was totally unexpected and we still haven’t had the time to process the award or the furniture fair itself. It’s extra pleasing that the award was for sustainability project of the year since everything we do on the programme has focus on sustainability”, says Suzanne Sköld, one of the students behind the exhibition.

Read the full motivation:
Sustainability project of the year: “Hurry up before we collapse”
by students on the Design + Change programme at Linnaeus University.
“How can a designer best contribute to a more sustainable future? Perhaps by not designing anything at all? This was the radical proposal that a group of students from Linnaeus University presented in their highly-noticed performance at the furniture fair, where they carried out a collective furniture choreography as a silent protest to the rampant consumer society”.
The Form Award jury consists of Form editors Bo Madestrand and Salka Hallström Bornold and Mats Widbom, CEO Svensk Form. 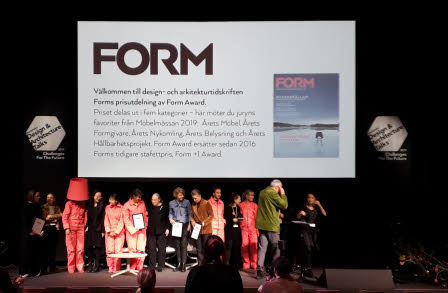 Fifteen second-year students from the programme Design + Change received the award. The exhibition was created within the framework of two connected courses and the team of teachers has consisted of Stephanie Carleklew, Stephan Hruza, Petra Lilja, and Ola Ståhl.