Fractured rocks of impact craters have been suggested to host deep microbial communities on Earth, and potentially other terrestrial planets, yet direct evidence remains elusive. In a new study published in Nature Communications, a team of researchers shows that the largest impact crater in Europe, the Siljan impact structure, Sweden, has hosted long-term deep microbial activity.

Life thrives deep beneath our feet in a vast but underexplored environment coined the deep biosphere. Colonization of these deep environments - on Earth and potentially on other Earth-like planets – may have been sparked by meteorite impacts. Such violent events provide both space to microbial communities due to intense fracturing, and heat that drives fluid circulation favorable for deep ecosystems. Especially on planetary bodies that otherwise are geologically dead, such systems may have served as rare havens for life with considerable astrobiological implications.

At the scenic site of Siljan, in the heart of Sweden, an impressive impact structure of >50 km diameter formed almost 400 million years ago. Previous well-known drilling attempts for deep natural gas are now renewed, and from these newly retrieved drill cores, a team of researchers have found widespread evidence of deep ancient life.

Henrik Drake, of the Linnaeus University, Sweden, and lead author of the study, explains the discovery:

“We examined the intensively fractured rock at significant depth in the crater and noted tiny crystals of calcium carbonate and sulphide in the fractures. When we analysed the chemical composition within these crystals it became clear to us that they formed following microbial activity.”

“Specifically, the relative abundance of different isotopes of carbon and sulphur within these minerals tells us that microorganisms that produce and consume the greenhouse gas methane have been present, and also microbes that reduce sulfate into sulfide. These are isotopic fingerprints for ancient life.”

Nick Roberts at the British Geological Survey, and co-author of the study, tells more about how the timing of the microbial activity could be estimated:

“We applied newly developed radioisotopic dating techniques to the tiny calcite crystals formed following microbial methane cycling, and could determine that they formerd in the interval 80 to 22 million years ago. This marks long-term ancient microbial activity in the impact crater, but also that the microbes lived up to 300 million years after the impact.”

“Our study shows that detailed multi-method investigations are needed to understand the link between the impact and the colonization”, Henrik Drake continues. “At Siljan we see that the crater is colonized but that it has mainly occurred when conditions, such as temperature, became more favourable than at the impact event. The impact structure itself, with a ring zone of down-faulted Paleozoic sediments, has been optimal for deep colonization, because organics and hydrocarbons from shales have migrated throughout the fractured crater and have acted as energy sources for the deep microbial communities.”

“The preserved organic molecules that we could detect within the minerals give us additional evidence both for microbial activity in the crater, as we find molecules specific to certain microorganisms, but also for microbial biodegradation of shale-derived hydrocarbons, ultimately leading to production of secondary microbial methane at depth.”

“Detailed understanding of microbial colonization of impact craters has wide-ranging astrobiological implications. The methodology that we present should be optimal to provide spatiotemporal constraints for ancient microbial methane formation and utilization in other impact crater systems, such as the methane emitting craters on Mars”, Magnus Ivarsson, Swedish Museum of Natural History, a co-author of the study, adds.

“Our findings indeed confirm that impact craters are favorable microbial habitats on Earth and perhaps beyond.”

Illustrations, including captions, to the press release can be found in a folder via this link, https://lnu.box.com/s/e03gzobjbr48vxmsfo9yse7lzqf5agac Image credits: Henrik Drake 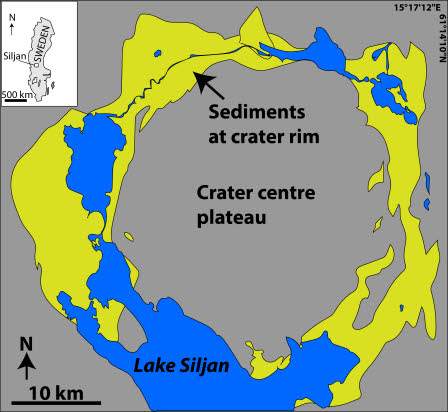 Map of the Siljan crater in Sweden, showing lakes (blue) and sediments (yellow) in the crater rim zone as well as Precambrian granitic rocks (grey). Illustration by Henrik Drake. 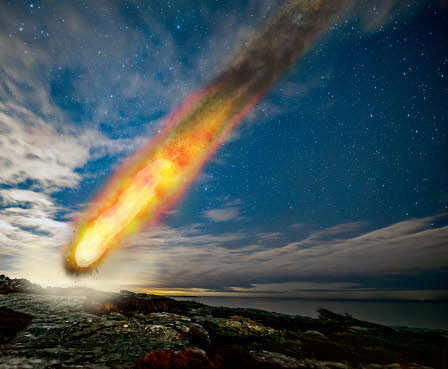