The Rectors, Presidents and Vice-Chancellors from seven of Europe’s leading universities met in Köln (Germany) to launch their shared vision for improving European citizens’ quality of life by creating a European University for Well-Being. Through top level education and research, the alliance will help to create an environment that allows for European citizens and their global neighbours to be well-educated, socially responsible, healthy, inclusive and diverse — all critical aspects of well-being.

The leaders of the Universities of Birmingham, Firenze, Köln, Leiden, Linnaeus, Nantes and Semmelweis confirmed the shared missions and values of the partners, and outlined the benefits to be gained from bringing together such a rich diversity of institutions.

To launch the alliance, which will be known as European University for Well-Being (EUniWell), the leaders announced an initial joint seed fund to stimulate research, teaching and policy development partnerships. This will support multilateral projects involving the universities’ 255,000 students and 44,000 staff members across seven European countries.

The initial focus of the alliance is well-being, especially of those people living in cities. In the longer term, the collaboration will define how a modern, civic and entrepreneurial university can support social and individual well-being in a global setting.

Well-being is one of the cornerstones of the European Union and a common European value. Since understanding and improving well-being requires a holistic approach, the collaboration will span research, education, and policy engagement. It will support learning at all ages: not just for university students, but also for life-long learners, and the training of teachers. It will foster equality and diversity, including multilingualism and multiculturalism.

In coming together at this scale and reach, the partner universities in EUniWell recognise their responsibilities for training the next generation of Europeans, enabling scientific breakthroughs and ensuring successful knowledge transfer to benefit society as a whole. As Europe’s next generation, students are the core of the alliance and are involved in all its aspects including governance.

On launching the collaboration, the leaders of the universities in the alliance said:

“We are delighted to combine the forces and strengths of our seven universities. We are creating an ambitious, visionary and distinctive alliance, that will support the well-being of our students, staff, cities and regions, and Europe more broadly.

This alliance will show how diversity and working across national boundaries, bringing together diverse but complementary universities, is the best way to address the key issue of the well-being of Europe’s population." 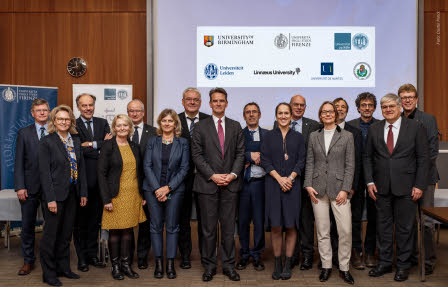