Two team members (Ulrika Randver, Sensus studieförbund and Lali Lindell, Linnaeus University) took the ferry from Ystad to Rönne where the Danish TM-team of Bornholm Museum had arranged one full day in the field. The day started with sunshine and we were amazed by how convenient it was to carry out field trips even in the month of November.

First stop was at a beautiful, serene and vast place called Almindingen. This place which today is covered by forest is known for its abundance of cup marks. Our excellent guide and experienced archaeologist Finn Ole Nielsen mentioned that a possibility is that people consumed parts of the rocks to obtain the power they contain. The large and high outcrops and solitary rocks could have been perceived to be more powerful than the rest. We also visited or spotted from the car several dolmens where pixies (‘de underjordiske’) according to folklore, have their habitat. Anthropologist Lars Roemer shared several stories about their beings and doings throughout time and how they are an important part of the Bornholm community and its belief system.

We got to experience that on Bornholm there is a Sun temple (on Rispebjerg) and that so-called sunstones, with etched sun-like symbols, were created and likely used in rituals. Numerous of these stones of various sizes and conditions have been retrieved and are stored at the Bornholm museum. Of course, we could not visit Bornholm without stopping by at the central place Sorte muld (Black earth) that in part consisted of a temple surrounded by palisades. The over 3100 gold-foil figures (‘guldgubber’) found here has given the place recognition also among the general public. Once we got there the rain started pouring down. We defied the forces of nature for a good 5-10 minutes before realizing continuing with a visit to the Bornholm Museum exhibition would be a better way to spend the rest of the day.

The following morning, we were guided by archaeologist Nicolás Caretta to petroglyphs at Madsebakke and the breathtaking Hammershus fortification overlooking the Baltic Sea and we also had time to make another stop by at the Bornholm Museum for a fruitful strategy meeting with Director Jacob Bjerring-Hansen. All in all, the study visit was successful, and we look forward to visiting soon again. All these amazing places mentioned here, and a few more, will be described in a report that will be available at a later stage in the project. 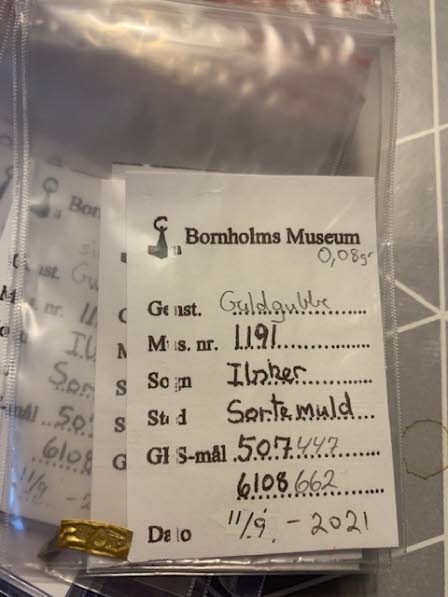 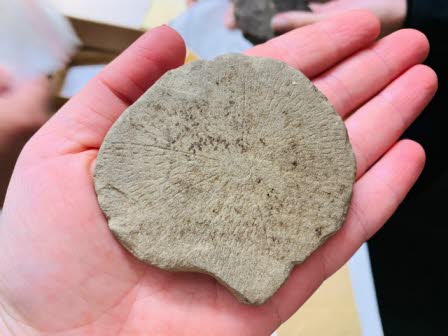 One of the most intact and precious sunstones from the sun temple on Rispebjerg, part of the Bornholm Museum collection. Photo: Lindell, L., Lnu
Previous Image Next Image 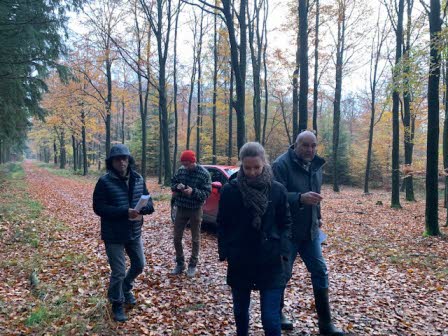