IN-DEPTH ARTICLE: Hanna Bensch has an unusual job. In many ways, her doctoral student position is about digging into the ground, both day and night, to look for small, aggressive mammals with razor-sharp teeth. At the same time, she must keep an eye open for scorpions, deadly snakes, spiders and not get lost in the darkness during night in the South African Kalahari Desert. It is not just any rodent she is looking for. In the last few years, many researchers have become interested in this, to say the least, peculiar little fellow.

But let’s start from the beginning.

“Both my parents are trained biologists and have worked and conducted research in the field in many places around the world. I often got to listen to fun anecdotes about strange places that were not your normal tourist destination, so the research world has always been present in different ways. For instance, it didn’t seem weird that we put up bird nets in our garden, or that we studied what we saw every time we spent time in nature. We learned how to separate the male from the female in different animal species, and to look for newts in the pond in our garden. In a way, you could say that I was born into this”, says Hanna.

However, it was not self-evident that Hanna was to become a researcher. In her teens, she wanted to try her wings and do something entirely different from what her parents were doing.

“I wanted to make a revolt, but I failed big”, Hanna says, laughing.
“I did have a really good biology teacher in upper secondary school, and enjoyed having a source of inspiration that was not one of my parents. But once I graduated I decided that I did not want to work with biology”.

Hanna took a sabbatical and started working to save up money. Like so many other young people, she travelled to Southeast Asia. However, when other travelers went to a full moon party, or the like, she hung out in different national parks to see wild animals. 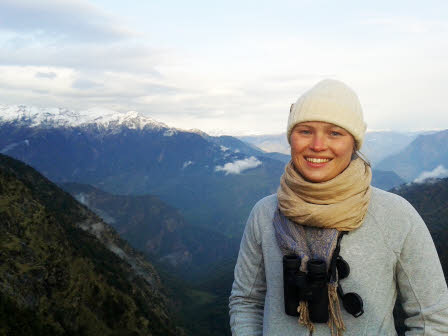 A fire was lit

“I don’t think I reflected on it at the time, but later on I came to realise that I am very interested in studying animals, preferably in cool nature. Before I left Asia, I submitted an application to the biology programme in Lund”, Hanna continues.

It was on the biology programme that her interest really got going. She started thinking more and more about whether research perhaps was her thing, after all. And that was the end of the revolt.

“After having completed my first year on the programme, I worked as research/field assistant in Lund, within a project on dragonflies. It was fun to be part of a research project and everything that comes with it. I then did an internship as assistant on a project in Trinidad & Tobago, and after that another one in India. This really lit a fire within me for research and the international workplace of the academic world”, Hanna explains.

Once she had completed her bachelor’s and master’s studies in Lund, she wanted to continue doing research, preferably at another university. She chose Linnaeus University.

“I wanted to do my doctoral studies at a Swedish university as this means security, stable funding, and opportunities for international collaborations. I saw the fact that Linnaeus University is a young university as an opportunity for innovation and equality. When the project on Damaraland mole-rats came up it felt perfect for me. I’m glad that I ended up in Kalmar as I really enjoy living in a smaller city close to nature”, Hanna continues. 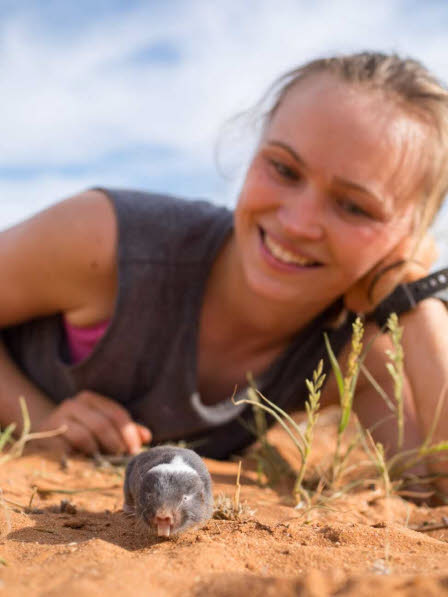 Hanna with the organism of her studies – the Damaraland mole-rat. The animal is almost blind but you better beware of the front part unless you want to get bitten. Foto: Yannick Francioli

Mole-rats are peculiar animals that are of interest to researchers for a number of reasons. Among other things, they are long-lived for being such small animals – one species, the naked mole-rat, can live for up to 30 years. Mole-rats can survive without oxygen for long periods and get all their food and water from one single root for which they dig and search around the clock. They live in, for mammals, a strange hierarchy with a dominant parental couple where the rest of the individuals do not get to mate. Their only chance to get to reproduce is to try their luck on their own and after about two years, the females usually grow tired of the collective and start digging their own tunnels in hope that a male will find its way there. Males that want to try their luck are instead believed to wander about above ground in search of holes with single females. 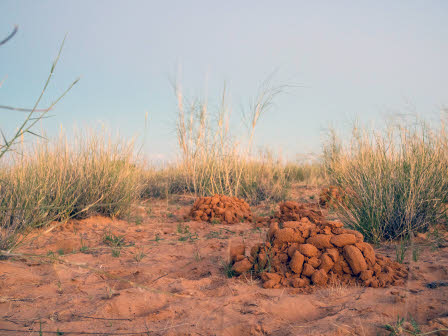 Mole-rats are interesting for many reasons, but Hanna focuses on the microbial communities within the gastrointestinal tract (gut) of group-living animals.

“In my master’s thesis, I studied ostriches in South Africa and how relationship within groups of juveniles affect growth and survival”, says Hanna. 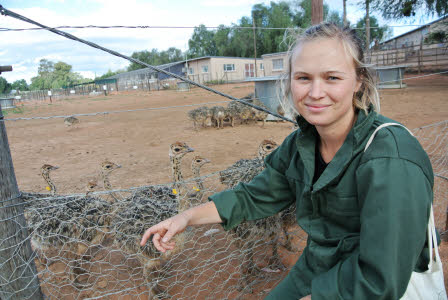 On the ostrich farm for master's work. Photo: Hanna Bensch

“I came in touch with this field through a project on the development of  microbial communities within the gut in ostriches. It occurred to me how little we know about how the microbial communities within the gut of wild animals is shaped, especially for group-living animals. The mole-rat project is perfect for this, as we can follow individuals and groups over time. Plus, I got to return to South Africa.”, Hanna continues. 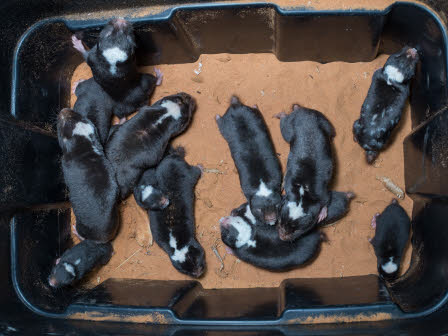 It has long been thought that the spread of bacteria between individuals is a negative consequence of living in a group, but the most recent research within the field shows that the exact opposite may be the case.

“In the last few years, research has shown that the gut contains a number of bacteria that are vital to animals, which means that the spread of such bacteria can benefit animals and humans. So far, few studies have been conducted on wild, group-living animals, and this is where my research will contribute”, Hanna explains.

Hanna had acquired a taste for field studies and travelled to the Kalahari Desert. Kalahari is a huge, semi-dry savannah in southern Africa that covers over 900,000 square kilometres in Botswana, Namibia, and South Africa. 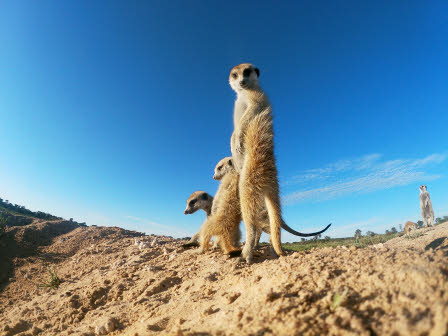 The research station in the Kalahari is primarily known for research on wild groups of meerkats. Photo: Hanna Bensch

“Up until now, I have made three field trips and spent a total of seven months in the Kalahari Desert in South Africa. The plan was to make two trips a year but this has not been possible due to the pandemic”, Hanna continues.

Hanna works on a long-term project in which all Damaraland mole-rats in the area are caught every sixth month. To catch all individuals in the reserve (some 25-30 groups) takes about three months. This makes it possible for the researchers to track individuals over time as every animal get a chip implant that can be used for identification. By recapturing them, Hanna can study their growth, how many offspring they get from one season to the next, and how individuals leave their groups to try their luck in finding a partner. 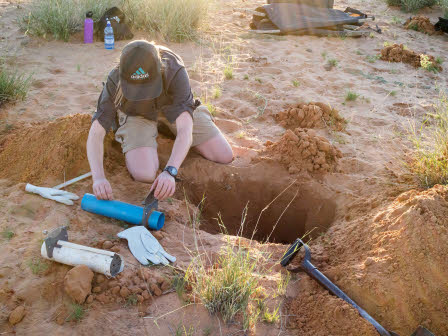 Shovel, trap, sweet potato, and gloves are essential if you want to catch mole-rats. The traps are checked every other hour as long as the temperature is not too high or too low. Photo: Yannick Francioli 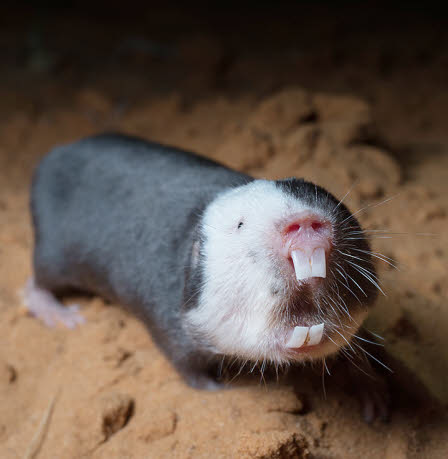 Close-up of one of the many Damaraland mole rodents that Hanna studied in the Kalahari. Photo: Yannick Francioli

“We work both day and night as these animals do not follow a certain clock and are more or less blind. A whole lot of digging is required in order to locate the tunnel systems, to mount and check the traps, and to take samples and measurements of the animals we catch, while avoiding being bitten. My study species only have two modes, either they are angry,… or really angry”, Hanna explains.

“What makes these animals so interesting is their complex group-living, their great variation in body size and reproductive success, and the fact that they are long-lived. How can they live for so long in the ground, and how do they manage to find each other? They live under ground, which means it is a challenge to get an insight into their lives in the wild”. 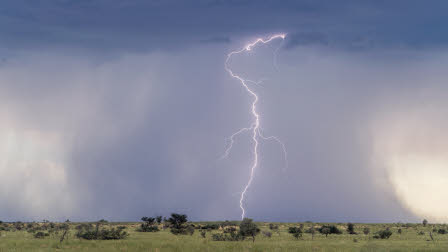 Thunder storms are frequent in the reserve. Photo: Yannick Francioli

Field work is not all beer and skittles

Working in the desert is not entirely unproblematic. Sometimes things happen that you do really not wish for. 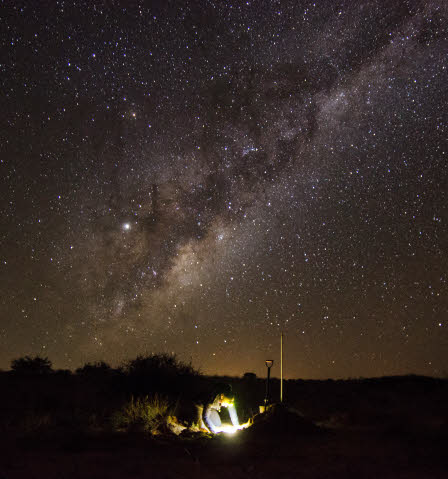 Night-time work in the Kalahari under the Milky Way. Photo: Kyle Finn

“One time, my car broke down when I was at the far end of the reserve alone at night, and I had to contact colleagues at the research station via radio to get my car going again. I’ve also experienced flat tires.

At night time, it gets incredibly dark and the batteries in my headlight have died a couple of times as well as the GPS, it has then taken quite a while to find my way back to the car. Sometimes, scorpions hide in the sand next to our traps, which means you must be very careful”, says Hanna.

However, this does not seem to frighten Hanna Bensch, who like a modern-day Indiana Jones continues to travel back to the arid Kalahari Desert.

“Haha, no, I wouldn’t call myself an adventurer, more of an explorer. I enjoy discovering new places and environments and quickly become restless if I spend too much time at home in the treadmill. It’s true that being a doctoral student involves a weird and challenging job, but there is also so much freedom and responsibility involved that I find it difficult to imagine anything else that would be as satisfying. I’m now looking forward to returning to my field work in the Kalahari”, Hanna concludes. 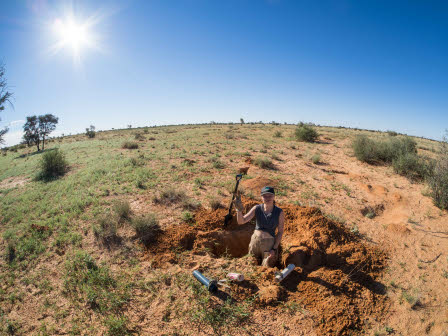 Hanna in one of the deeper holes, on the hunt for new tunnels. Photo: Yannick Francioli