Sámi people in Sweden have small possibilities to exert influence on the handling of their cultural heritage. Despite the fact that Sweden and Swedish archaeologists have backed a number of international policies for indigenous peoples and cultural heritage, the implementation of the guidelines is slow. This is true not least for commercial archaeology. The results are presented in a licentiate thesis by Charina Knutson, doctoral student at Linnaeus University.

According to the UN Declaration on the Rights of Indigenous Peoples, which Sweden signed in 2007, indigenous peoples are to have insight into and influence on the handling of their cultural heritage. However, is this policy followed in practice? Charina Knutson is a doctoral student in archaeology within GRASCA graduate school at Linnaeus University. In her licentiate thesis, she has studied how the contract archaeology system in Sweden works in relation to the country’s indigenous people, the Sámi, and studied their participation in archaeological projects.

The study is based on an archive study of contract archaeology reports in Jämtland’s County and interviews with people who in one way or another work with Sámi cultural heritage. The projects that have been studied are reports on road planning, power line work, and construction of wind turbines and winter tourism facilities.

The Sámi people are rarely contacted

“My results show that the Sámi people are rarely contacted or involved in archaeological projects. The archaeologists often carry out their work without having a dialogue with the indigenous people. In particular this is the case within commercial archaeology, where there is a level of competition for the commissions and the companies strive to keep their costs down”, says Charina Knutson.

“There are two main disadvantages of conducting the archaeological commissions without Sámi collaboration: the Sámi people feel that they have been steamrollered and disregarded, and the archaeologists may miss out on important information about the cultural history of the area in question”, Charina Knutson explains.

The handling of Sámi cultural environment protection differs between different counties, and between different archaeological companies. This becomes a problem in itself, since it becomes difficult for the Sámi community to know what applies in their particular area, and what they should do to be able to exert influence on the system so that it meets their expectations.

However, the study also contains hopeful elements. Through interviews, it becomes clear that many land developers would not oppose Sámi participation and competence at all, even in cases where this would increase the costs for a project. The county administrative board network also has ambitions to establish common strategies for Sámi cultural environment protection.

“The county administrative boards play a key role in the contract archaeology system. I hope and believe that they have good development work underway, through which they will partly find ways to encourage archaeological companies to involve the Sámi community and partly establish a well functioning dialogue between themselves” Charina Knutson continues.

“Changing the routines for contract archaeology can be a good way to start. Nine out of ten archaeological projects in Sweden are commercial, and Sámi cultural heritage has been confirmed on at least 50% of Sweden’s total land area. Which means that this would have a great effect”, Charina Knutson concludes.

Link to the licentiate thesis: Conducting Archaeology in Swedish Sápmi – Policies, Implementations and Challenges in a Postcolonial Context.

GRASCA is a company graduate school for Swedish contract archaeology. 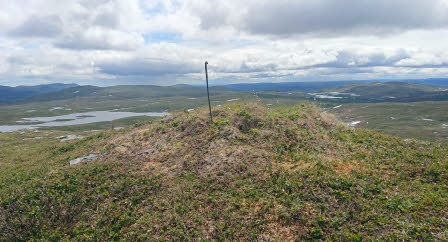