What changes take place in the Arctic Ocean, in a world that is becoming warmer and warmer due to the ongoing climate change? This was one of the questions in focus last year when an Arctic expedition travelled from Sweden to the Arctic, with a group of researchers from Linnaeus University.
“There were hardly any previous studies on the ice and ocean in the central parts of the Arctic, an area that is very difficult to access and explore”, says Christien Laber, one of the researchers who took part on the expedition.

The journey to the Arctic did not start on a boat. In a COVID-19 world, it started with quarantining in a hotel.

“I remember staring at the only picture in my hotel room for eight days, showing Marilyn Monroe”, Laber says laughing. He was one of 38 researchers who took part on the polar expedition in July–September 2021.

“After having spent so much time alone on a hotel room it was truly special and really exciting to be on a ship with 75 other people heading for the Arctic”, Laber continues. 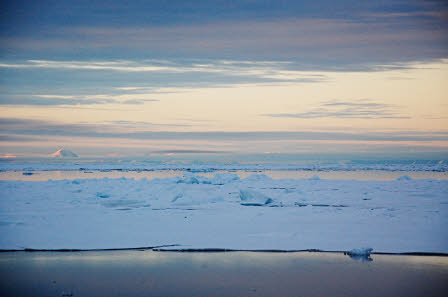 The researchers were met by a landscape in blue and white as they arrived in the Arctic. Christien Laber

The Synoptic Arctic Survey is an international collaboration with the aim to map out the status of and changes to the Arctic ecosystem. The Swedish contribution was on board the icebreaker Oden, which Laber describes as a phenomenal ship. Oden is the world’s strongest icebreaker used for scientific research, one of the reasons that Sweden organized the expedition. On the Swedish expedition, the researchers tried to access places that have previously been covered by thick sea ice, like the area north of Greenland.

The weather is very challenging in the central Arctic. There is a lot of fog and the sheets of ice, called floes, are constantly moving around, making it difficult to navigate. It was difficult to predict if they would even be able reach that area, despite having a very detailed plan.

“Before heading off on an expedition, we have a so-called ‘sunshine plan’, meaning what it may look like if everything goes well and the weather gods are on our side. If this proves the case, we want to travel along a specific route and visit as many sample sites as possible”, Laber explains.

Once the quarantine was completed, the researchers felt thrilled, the weather was good and Oden was on its way north. On board the ship, the researchers shared rooms and had to make do with limited space. The ship, however, is big and contains everything from a library and a gym to a cinema and a sauna. And, of course, many laboratories and offices, and instrument containers.

One week into the journey, the researchers started closing in on the Arctic. Laber clearly remembers what he thought about at the time.

“I thought a lot about what it would look like once we reached the Arctic. Where does the ice start? Would there be compact ice cover, like a clear dividing line, or would the ice increase gradually as we continued north? We travelled between ice and open water for several days. One night, I sat on the deck to see what it looked like. It was like a gradient; small ice floes gradually became bigger the further north we travelled. Eventually, the ice became more compact, but there were still many openings in the ice cover through which the ship could continue more effectively”, says Laber. 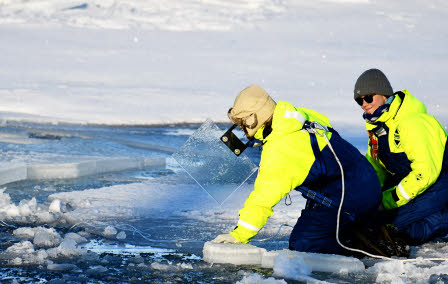 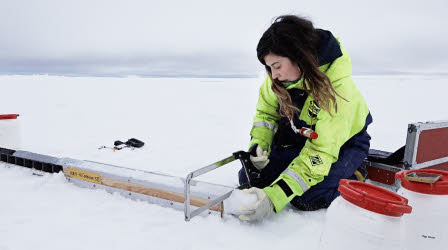 The researchers have gathered a large amount of samples from the sea and ice. Christien Laber

A blue and white world

Near the North Pole, the northernmost point in the Arctic, there is not much life, but when the researchers passed Svalbard, they spotted puffins, whales, seals, polar bears and walruses. Oden made its way through the ice, which in some places was three meters thick. Being in the Arctic, such a remote place on our planet, evoked emotions.

“The fact that we were even able to reach the central Arctic gave me an insight on what is really possible. At the same time, we were so dependent on the ship, we could not have managed without it. Looking out over the vast sea ice was truly magical”, Laber continues.

Hanna Farnelid, associate senior lecturer and associate professor of marine ecology, was also on board the icebreaker Oden. She describes the Arctic as a blue and white world.

“It’s so beautiful with all the intense blue and white. The light was also special throughout our journey, we didn’t see a single sunset in about six weeks”, says Farnelid.

The polar Synoptic Arctic Survey - Oden expedition with the icebreaker is arranged by the Swedish Polar Research Secretariat and is part of an international collaboration. The secretariat is a government agency tasked with coordinating and promoting Swedish polar research. The countries that take part in the coordination of the polar expeditions will visit different parts of the Arctic. So far, 26 journeys are planned up until 2026. Due to the covid-19 pandemic, the first journey was postponed until 2021.

When August turned into September, the expedition participants noticed that it was becoming colder. Timing is everything when you visit the Arctic, the weather is incredibly important. Since the ice is constantly moving, you must be flexible during the journey as the ship may get stuck in the thicker parts of the ice if things go bad.

“Due to the changeable weather, planning is an ongoing process. We took somewhat fewer samples than we had planned, but we still did very well, and the weather was on our side. On a few days, the temperature went down to minus 9–10 degrees Celsius”, Farnelid continues.

The researchers were especially pleased about having visited the central parts of the Arctic, a destination that is difficult to reach even with a ship like Oden.

“Some of the places we visited looked entirely different than on the map and the charts differed by several hundred meters. After the expedition, we could redraw certain parts of the maps”, says Farnelid.

The researchers collected different types of samples. They collected both ice and water samples from the boat as well as by walking on the ice. Some of the samples were analyzed on the ship, but the samples that required more advanced equipment were stored in freezers and brought back to Kalmar. 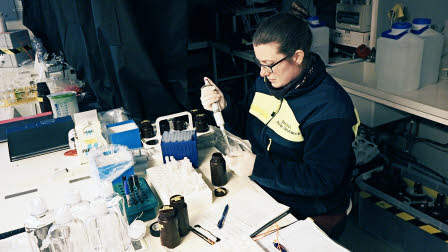 Hanna Farnelid prepares some of the water samples that will help us get a better understanding of the Arctic ecosystem. Christien Laber

Plankton play an important role in the ocean

Together with colleagues at Linnaeus University and researchers from other universities, Farnelid and Laber take part on a number of projects. They have, among other things, studied bacteria, phytoplankton, zooplankton, and viruses.

“During the expedition, we collected an incredible number of samples and data, which means we can now continue working on these projects for years to come. Many of the samples could not be analyzed onboard, which means that the laboratory work will be conducted here in Kalmar, Farnelid explains.

Two of the research projects conducted onboard by Linnaeus University researchers focus on studing Arctic phytoplankton. Phytoplankton are important for the Arctic ecosystem since they constitute the basis for the marine food web. They are absolutely critical to fish in our oceans and to the concentration of oxygen in our atmosphere. The phytoplankton species that can be found there and how much carbon they sequester is of great consequence to life on Earth.

“Studying phytoplankton is important in order to understand how global warming will affect the Arctic ecosystem. Given the fact that the Arctic is becoming increasingly warm, the share of the very smallest phytoplankton, the picophytoplankton, is expected to increase, and also small cyanobacteria may expand to the Arctic. These could possibly compete with existing species and bring about a shift in the plankton composition. Such a shift may have great consequences for the carbon cycle and the food web”, Farnelid explains. 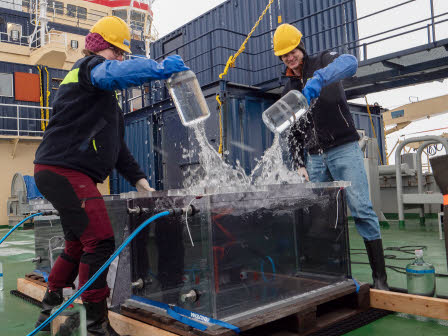 Some of the experiments could be performed aboard. Here, the researchers examine plankton in a container that is designed to have the same temperature and lighting conditions as the sea. Christien Laber 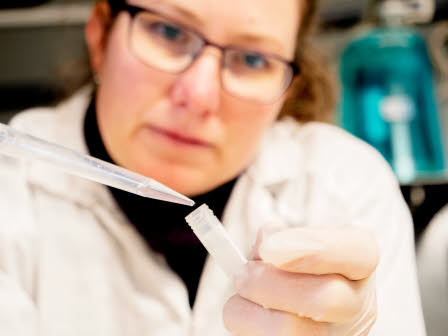 Hanna Farnelid is one of the researchers from Linnaeus University that travelled to the Arctic to better understand how the Arctic is reacting to climate change. Christien Laber

More knowledge about rapid change in the Arctic

Going forward, a number of the SAS projects will continue to study different parts of the food web, which will give us more knowledge about the important biology and energy transfer occurring in  a quickly changing Arctic ecosystem. Atmosphere changes that are occurring due to current emissions of fossil fuels, are profoundly impacting the Arctic ocean and its currents through heat and carbon dioxide transfer into the ocean from the atmosphere. This in turn impacts the life that grows there.

“Everything that happens in the Arctic has an impact on oceans and landmass further south. Thus, it is incredibly important that we acquire more knowledge about the Arctic”, Laber adds.

“Yes, the Arctic is a very important area that is rapidly changing as a result of climate change. In order for us to gain more knowledge about how these changes happen and how they affect other parts of the globe it is important to understand how the entire ecosystem functions. Together with the other researchers and other polar expeditions, we hope that our analyses will help us get the full picture of how climate change is affecting the Arctic”, Farnelid concludes.

The research projects about the Arctic Ocean is part of the research in:

Read more about Linnaeus University's research about the Arctic: