The following text is the impressions from a study visit to Sweden in April 2022, made by Lithuanian organizations The EUCC Baltic Office and the Administration of Zemaitija National Park.

The EUCC Baltic Office and the Administration of Zemaitija National Park are looking for new knowledge and experiences. Both Lithuanian organizations are very lucky to participate in the Time Machine project. The theoretical knowledge and exchanging information on sacred places the project partners are achieving during online meetings and while doing research works. Great experiences on sacred places as attractive tourism destinations on the other hand, all the partners could get during the study visits. Here is our experience from one of them:

On beautiful last days of April, two Lithuanian team members (Daiva Abrutė, Administration of Zemaitija National Park and Aiste Jurkienė, EUCC Baltic Office) used car, plane and train to come to Malmö where the study visit in Sweden began. The first amazing impression all the participants of the study visit got during the lunch time on the 30th floor with the view of two great Baltic cities – Malmö and Copenhagen, as well as the Baltic Sea in between. 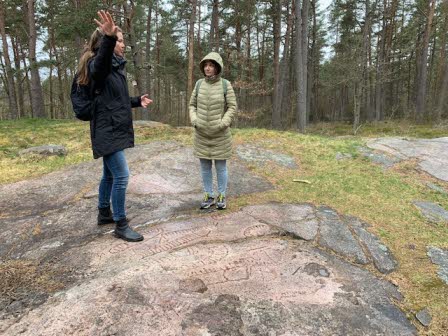 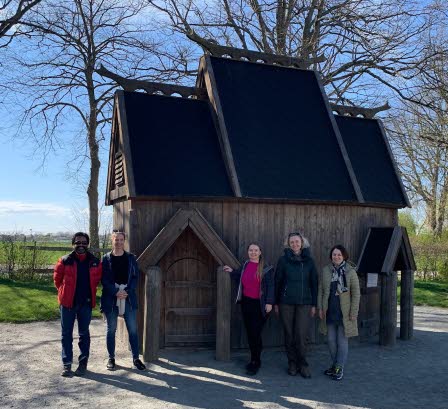 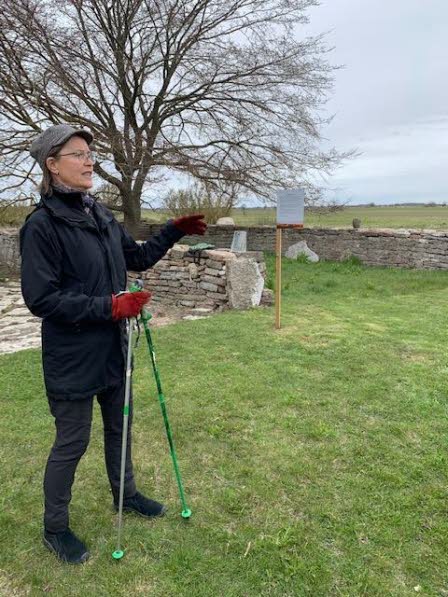 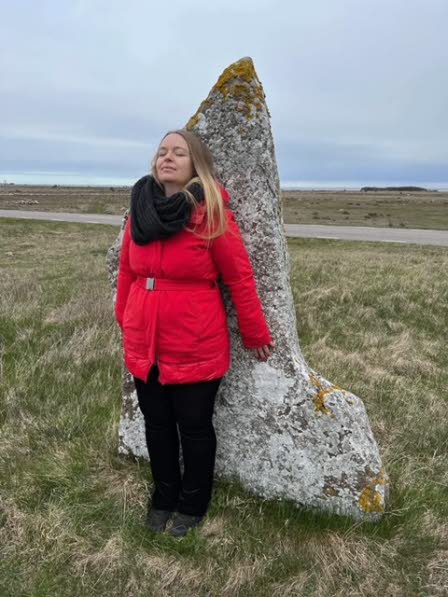 Lali Lindell experiencing one of the boulders at Seby gravfält. Helgesson, A., Ölandshälsan.
Previous Image Next Image 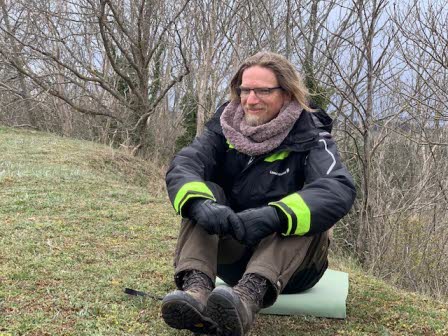 Ludvig Papmehl-Dufay experiencing one of the sites with the senses. Lali Lindell, Linnaeus University
Previous Image Next Image 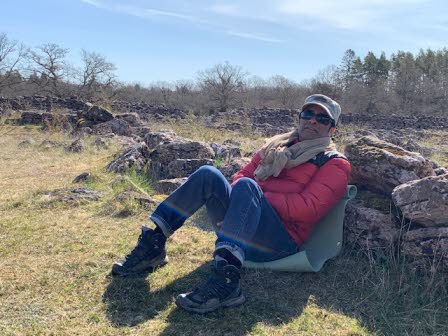 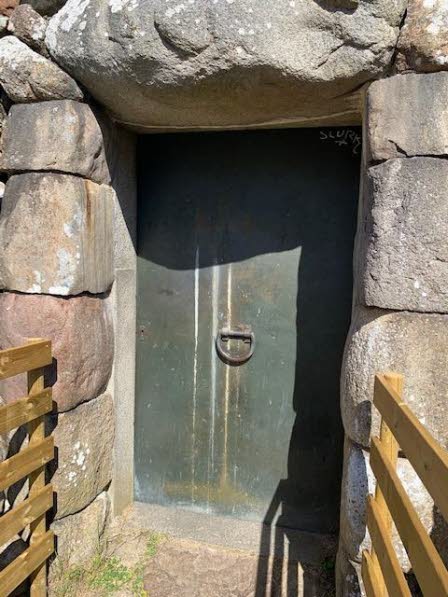 After the cozy lunch all of us drove to Uppåkra – an Iron Age archaeological site.  Ulrika Randver (Sensus studieförbund) told that the place was excavated and remains of an Iron Age building interpreted as the possible remains of a temple, we enjoyed a short movie about it and the visit was crowned with a yoga session lead by Elias Astour – an absolutely unforgettable experience. A late April sunset all of us admired during a nice dinner in Kåseberga, getting ready to the next day’s task – visiting Ale Stenar and performing a mystery experience there prepared by project manager Lali Lindell (Lnu), after which the Lithuanian ladies enjoyed a Fish Spa pedicure at Kåseberga.

The second day of the study visit began in an unusual way: in the very early morning, in complete silence, the whole team went to the Stone ship setting Ale stenar. There was a short stop to listen to a beautiful poem about the giant stones and then by the peaceful blue sea, the fantastic view of the Stone ship opened before our eyes. The mystery began with entering the ship, finding our own place, listening with closed eyes to the sound of what appeared to be drums and cymbals, meditating, sensing the place and connecting with it. A beautiful and memorable start of the day.

The next stop was at Kiviksgraven and Ängakåsen. A marvelous woman – our guide Ann-Louise Ferngård, met us at the entrance of an unusually grand Nordic Bronze Age double burial. She treated us with an ancient drink and snacks (berries), and then let us in to the cave where the Kings were buried. We could see the signs of the cult of the Sun and Moon: the adorned cists with petroglyphs. The images carved into the stones depict people, animals (including birds and fish), ships, symbols and a chariot drawn by two horses. Our wonderful guide who is a professional archaeologist showed and even let us touch the figures. For some of us this experience showed to be the most fantastic and impressive of the whole study trip.

After a nice lunch in a local restaurant we moved to Blekinge, Västra Vång where Blekinge museum archaeologist Mikael Henriksson brought some pictures and maps and told about remarkable archaeological finds have been made, that he landscape around the pebble ridge has many traces of settlements from the Stone Age onward, tombs and burials from different times.

The third day, a bit cloudy, windy and sometimes rainy began very especially. Right after breakfast in Ronneby, the team went for a short walk to Hästhallarna where the Lithuanian ladies were absolutely amazed. In the little village situated in the woods, hiding among the trees a beautiful stone paving with runes suddenly appeared. It is quite large, but there were no apparent signs that could guide a tourists there, so we could admire the runes undisturbed.

We had a Swedish traditional lunch in Mörbylanga (Öland) where met two more team members – Ludvig Papmehl-Dufay and Anna Helgesson who nicely guided us to Mysinge gånggrift (passage tomb) with megalithic tombs in the form of dolmens and we had a great meditation session in a valley. In a windy and cloudy day we could warm ourselves up laying in the grass, listening to the sound of the valley. It is absolutely amazing to view huge boulders from ancient burials just lying on the fields and among homesteads. One of such grave-fields we visited was Seby gravfält. There we enjoyed poems of Bodil Magnusson – a beautiful poet who conveyed all her love for the environment, for nature, and for the ancient myths through her poems.

After this we all went to Sandbyborg, an Iron Age fort where massacres took place at the end of the fifth century AD. It is unbelievable that such a cruel scene can be witnessed in such a quiet place — on a sandy beach and a seaside meadow especially when the sun finally appeared in the sky. Most of us needed to calm down and lovely Anna helped us with her meditation session. Later we all went to Sjukällorna (seven springs). Reaching the place through swamps, bushes, and tall grass was not so easy, however, it was a challenge we overcame.

The last day, just a few hours before leaving, all the team had a nice walk in the forest with forest bathing while we reached the Ismantorp borg - the remains of a ring fort located in the middle of the Öland island. The stone walls of the ring fort are still tall, the walls of former stone houses are no more so tall, but rather clearly define the boundaries of the foundations. The place is absolutely great with its own aura and atmosphere. In total, we had four fantastic days to visit, see, feel and study sacred places in Sweden. The study visit was successful, very useful and inspiring.