The Wels catfish in Sweden can become older than what researchers have previously thought. Our largest freshwater fish can reach an age of more than 70 years and become more than 2 metres long. Researchers at Linnaeus University have studied the red-listed species for ten years – and still get excited when they manage to catch one.

“It feels a bit weird to go fishing for a fish that is my age, a fish that was born shortly after World War II”, says Per Larsson, professor at the Department of Biology and Environmental Science.

The Wels catfish is the largest freshwater fish in Europe. It’s blue-black with distinct barbels that look like whiskers around its mouth. However, the most evident characteristic, is its massive size.

“We have tagged and studied more than 1,000 fishes. Our results show that it’s not uncommon with weights of over 30 kilos and lengths of close to two metres. Such a large Wels catfish can be 70 years old”, says Kristofer Bergström, who is writing his doctoral thesis on Wels catfish.

The exceptional longevity was recently presented in the journal Scientific Reports.

But how can you determine the age? 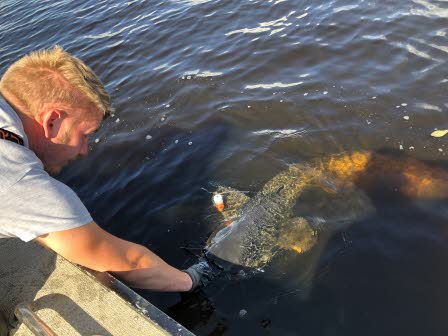 To learn more about the behaviour of the Wels catfish, the researchers have put transmitters on some of the fishes.

Time-consuming to determine the age

It’s a bit challenging to determine the age of a Wels catfish. The most used method for determining the age of a fish is to analyse various parts of the skeleton from a dead individual. This way, you can study changes to the bone structure, for every summer and every winter the fish has lived, like the annual rings of a tree.

In Sweden, the Wels catfish (Silurus glanis) is rare and threatened. It can only be found in three water systems, Helgeån/Möcklen, Emån, and Nyköpingsån/Båven. It is a relic from a post-glacial warm period (8,000 years ago) and in Sweden the fish is on the absolute limit of its distribution range. In central Europe, where the Wels catfish is common, they are widespread. In these regions, the Wels catfish can reach weights of over 100 kilos and lengths of 2.5 metres. It is the largest freshwater fish in Europe. The research group from Linnaeus University has studied the Wels catfish for over 10 years in Möckeln and Emån.

Determining the age of a living fish is more challenging. In order not to harm the red-listed catfish, caution is required. Therefore, the researchers use another, but more time-consuming, method.

“We catch the catfish at a certain time and measure it and weigh it, and then we hope to recapture it in the upcoming years to measure how much it has grown. By compiling this information on growth over time for many fishes of different sizes, we can determine how old a fish is at a certain length”, explains Oscar Nordahl, the researcher who has been working with the age model. 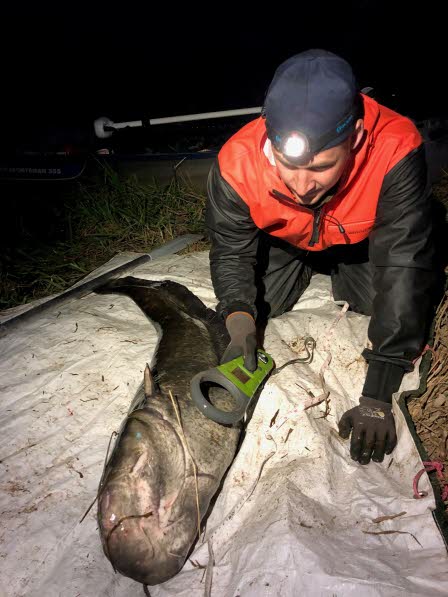 Every catfish is tagged with a small chip that makes it possible to separate the individuals and keep track of their development. The researchers examine the fish as quickly as possible and then release it back into the water. Given the size of the fish, it’s easier than you might think.

“Wels catfish are really nice and patient. I’ve been working quite a lot with pike and they struggle all the time and are very challenging to handle. Wels catfish are cooperative once we have gotten them out of the water. It’s the nicest fish I’ve ever worked with”, says Bergström. 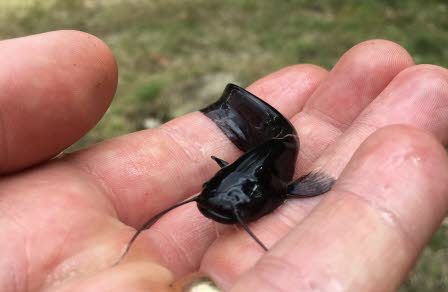 “This is the smallest Wels catfish that we have caught. It only measured 7 centimetres and was probably a few months old”, says Bergström, doctoral student.

Wels catfish is rare and threatened in Sweden. Nowadays, it can only be found in three places in the country, all of them in southern Sweden. It is likely that the Wels catfish used to be widespread in Swedish waters, but it has gradually disappeared due to cold climate, pollution and other human impact on its water environment.

One reason to the fact that the Wels catfish is rare in Sweden and has disappeared from our Nordic neighbouring countries is the slow growth compared to catfish in Europe. The Swedish Wels catfish does not become sexually mature until the age of 12, which means it takes a long time for it to spread and become established in new locations.

“The slow growth and the high age may be a result of our climate. Wels catfish love warm waters. In Sweden, it lives on the limit of its lower temperature tolerance”, explains Petter Tibblin, associate professor.

For over ten years, Linnaeus University’s research group studies the catfish in Emån and the lake Möckeln in Småland. They go there several times every spring and autumn and each sampling involves several days of fishing to study and tag the fish. Part of the work is conducted at night, as this is when Wels catfish are most active.

The objective of the research is to learn more about the ecology of Wels catfish and its behaviour. This knowledge basis will then be of use for authorities in their conservation work for the red-listed species. 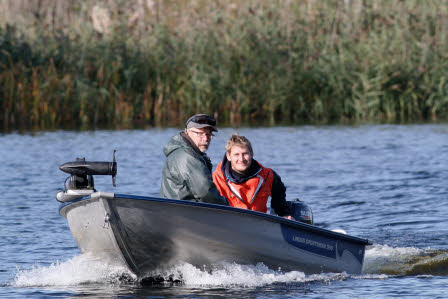 Wels catfish can reach 70 years of age in Sweden, shows research by, among others, Per Larsson, professor and Kristofer Bergström, doctoral student.

To gain a better understanding of the Wels catfish

To learn more about the behaviour, the researchers also put transmitters on some of the Wels catfish. Every fifth minute, information is updated on at what depth the fish is swimming and what the water temperature is. This is important information for Bergström and his colleagues. 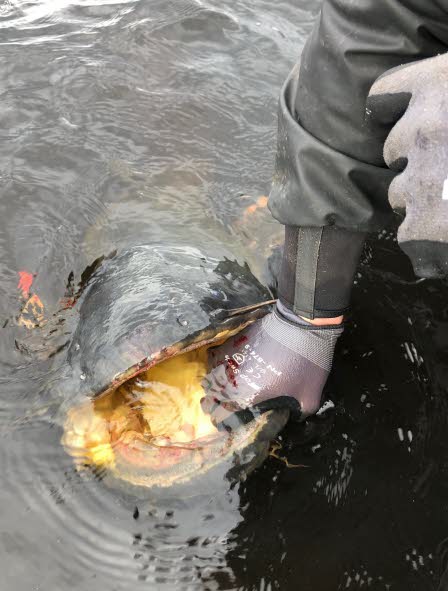 Wels catfish are cooperative once we have gotten them out of the water. It’s the nicest fish I’ve ever worked with”, says Kristofer Bergström, doctoral student.

“In order to be able to carry out conservation measures, we must gain an understanding of the fundamental behaviour and biology of the fish: Where and when does it spawn and what does their movement pattern look like? What does the Wels catfish eat and when is it most active during the day, and during the year? Is it active also during winter? This is a red-listed species that we know little about in Sweden”, Bergström continues.

The small transmitter that is attached to one of the pectoral fins does not seem to disturb the fish. Our data show that it does not affect their behaviour. “This was an important observation”, says Bergström.

Once it is back in the water, it swims slowly into the depth. This calmness shows that the two-metre fish is well aware of its position at the top of the local food chain.

“The Wels catfish has been red-listed because it can only be found in a few places, not because it is having difficulties surviving in these places. It seem to be doing well where it is found today”, Bergström explains. 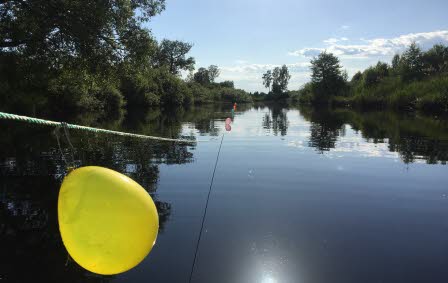 Wels catfish are caught with longline, a long line on which you attach bait. After the fish has been marked and sampled, it is released back into the water.