The Academic Ceremony at Linnaeus University

At the Academic Ceremony, it is academic achievement that is in focus and the subject of celebration. It is also an opportunity for the university to present its research initiatives to the general public.

The Inauguration of Professors

As with the promotion of doctors, the inauguration of professors originates in the ceremonial practices of the Middle Ages. In Swedish, the inauguration is referred to as installation and the professors to be inaugurated installandi, which originates in the church ceremonies where a member of a chapter was appointed to their office, thereby receiving their own seat in the choir stall, the stallum. Professorial inauguration ceremonies have been held in Sweden since the beginning of the 17th Century, starting at Uppsala University. 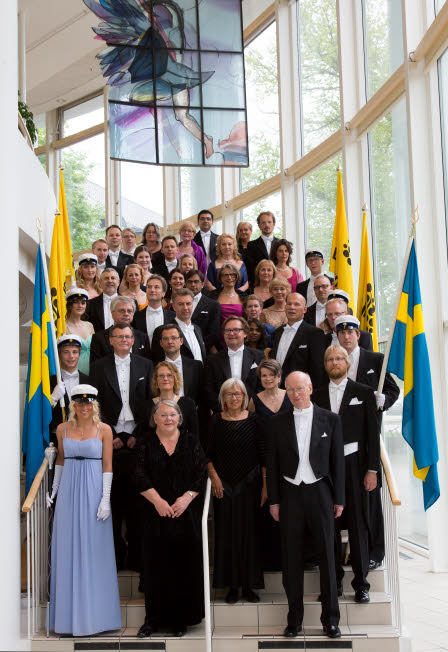 At Linnaeus University's academic ceremony, tenured and adjunct professors are installed who have been offered employment by one of the faculty boards during the previous year. Participation in the professorial inauguration is on a voluntary basis. It is the vice-chancellor of the university that inaugurates the professor.

The format of the inauguration ceremony has over the years come to encompass two broad aspects. The first aspect is a form of welcome, a mark of acknowledgement from the circle of professorial colleagues. The other and most important aspect is to focus attention on the subject area concerned, as a format for the dissemination of research information. Professors to be inaugurated will have the opportunity to give a shorter scholarly lecture, a so-called inauguration lecture.

Inauguration lectures are normally held immediately prior to the Academic Ceremony, during the same week, and are open to the public.

At Linnaeus University, doctoral degrees are conferred following the fulfilment of examination requirements, that is to say that doctoral students have successfully defended their theses during the previous calendar year and applied for their degree. 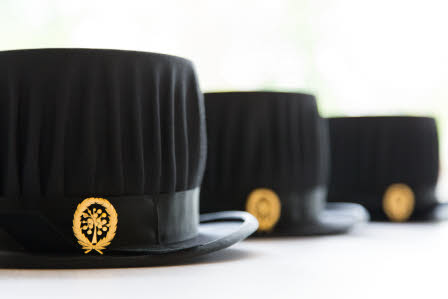 The conferral of doctoral degrees is acknowledged as the most important and traditional of academic ceremonies. The act of conferral is a degree-awarding ceremony with origins in the oldest medieval universities of southern Europe. The first documented degree conferral in Sweden was held in Uppsala on 22 January 1600. In Lund, the first ceremony was held in 1670. Other Swedish universities and higher education institutions were etsbalished much later and, as a result, started with their ceremonies much later.

The word promovere literally means to launch or push forward, but in this context the word is most closely related to promoting to higher office. Those participating in the conferral ceremony are referred to as promovendus, promovenda, plural promovendi. Following the ceremony, candidates are referred to as promotus, promota, promoti. During the course of the ceremony, the university awards the insignia of the doctorate in the form of a doctor's hat or laurel wreath, ring and degree diploma.

The 'promotor' is the person who confers the title of doctor on the promovendi. The promotor is seen as a link in the chain of academic tradition. An important aspect of the conferral ceremony is that the 'promotors' begin the ceremony by placing the laurel wreath or hat upon themselves, reciting the words: I NN, doctor of philosophy...

The insignia are symbols that are awarded at the degree conferral ceremony. The insignia have a symbolic meaning and consist of: laurel wreath or hat, ring and diploma. At Linnaeus University, the laurel wreath and diploma are awarded to all participants in the degree conferral ceremony. Newly qualified doctors can purchase hats and rings if they so wish. 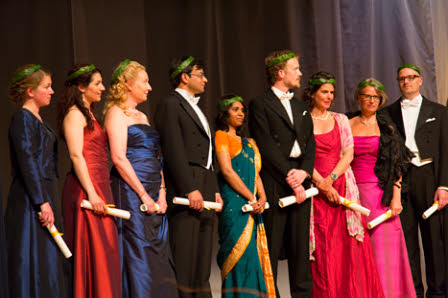 The tradition of appointing honorary doctorates, doctores honoris causa, became commonplace at first during the early 1940s. An honorary doctorate can only be awarded at a promotion ceremony. The accepted practice for what sort of achievements can be honoured through the award of an honorary doctorate differs between universities, but it is always the faculties themselves who decide on the award of honorary doctorates. Often this award involves researchers from other countries who have cooperated with the university's teachers but it can also involve other people from outside the academic world whose inclusion in the scholarly community is desirable for various reasons.

A person can be awarded an honorary doctorate by Linnaeus University who:

Persons who have been put forward for this award should not already possess an honorary doctorate with the same designation from any other Swedish university or higher education institution. Furthermore, the university should not be in a clear dependency position in relation to the proposed persons.