When archaeologists excavate ancient graves, we typically encounter either more or less complete skeletal remains or burned human bone. What we find are the results of a series of dynamic processes of decay. These are linked to natural processes, such as putrefaction and decomposition, but they also depend on how the body was treated after death – what we call mortuary practices.

Mortuary practices is a term that refers to all practices connected to death and burial within a culture, and are understood as important customs that give form to values and concerns, belief systems, and identities. In order to reconstruct these culturally central practices, we need to visualize them and separate them from the results of natural processes.

From the 1970s French archaeologists and anthropologists began to develop a multi-disciplinary approach called archaeothanatology. Using an approach drawing on anatomy, taphonomy, and forensic science, in combination with detailed archaeological observations in the field, the archaeothanatologist systematically separates out the cultural factors (the mortuary practices) from the natural factors (that can be linked to the natural processes of decay). This approach makes it possible to reconstruct in detail how people in the past handled their dead – if they were buried in a coffin or in a filled in pit, if they were buried clothed, if they were wrapped or placed on cushions or platforms, if they had decomposed somewhere else prior to the final deposition, or if people later opened the grave and interacted with the putrifying or skeletonized remains.

Today we have new possibilities to test and further develop our knowledge in the field. Archaeologists are testing foundational assumptions about decay processes through experimentation, for example at human decomposition facilities, also referred to as ‘body farms.’ Other work visualizes processes in digital reconstructions, or develops new tools for documentation and analysis of burial during excavation. We can also use the methodologies and knowledge they generate to ask new theoretically driven research questions.

The Archaeothanatology Working Group is based in Northern Europe and consists of a group of researchers with complementing skills and competences who all use archaeothanatology in their research and in different ways work on developing methods, concepts and theories. The network is unique in Scandinavia. 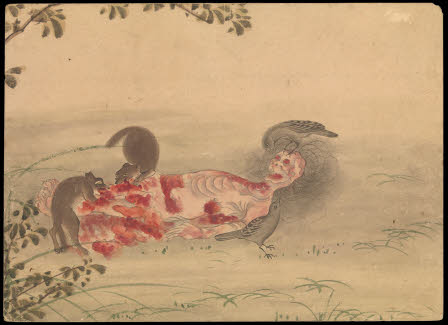 Kusōzu: the death of a noble lady and the decay of her body. Watercolours. Credit: Wellcome Collection. Attribution 4.0 International (CC BY 4.0)

Researchers at other universities