Curated by Leila Papoli-Yazdi as part of World Heritage Day 2021 - officially known as the International Day for Monuments and Sites.

The exhibition is hosted by the UNESCO Chair on Heritage Futures.

Focusing on Iran’s Mashrouteh (Constitutional) Revolution, Ali Roustaeeyanfard’s paintings reconfigure historical photographs of complex historic events and processes at the beginning of the 20th century. By adding colourful anachronistic details to the original motifs of the photographs his work depicts unimagined futures and the need to re-narrate the past in every present. The paintings illustrate that there are unexpected and diverse futures, both of the past and of the tangible heritage that reminds us of the past in the present. Roustaeeyanfard’s hope is to revive the forgotten heritage and history of voiceless people in order to fulfil their original dream of achieving freedom and progress through the Revolution.

Acknowledgement: Thanks to Cornelius Holtorf, Helena Ryden and Annalisa Bolin for support 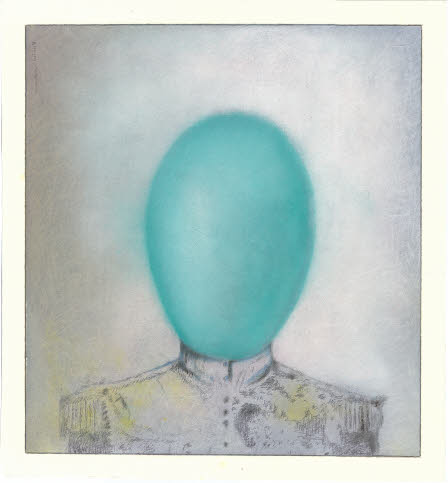 2. The command. Oil on paper

3. The Ravens of Death. Oil on paper

Painted based on a historical photograph. Naser al-Din Shah (r.1848-1896) and courtiers. 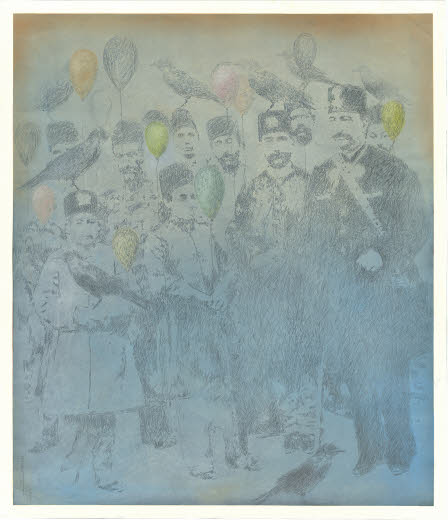 Painted based on a historical photograph. Mozaffar al-Din Shah (1853-1907) and his courtiers. 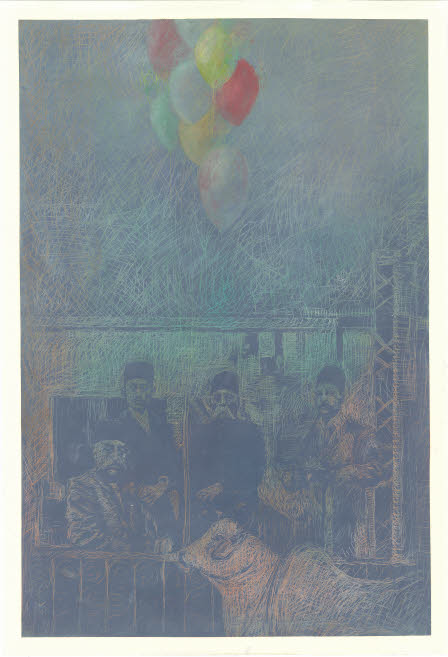 5. Invited to the banquet. Oil on paper 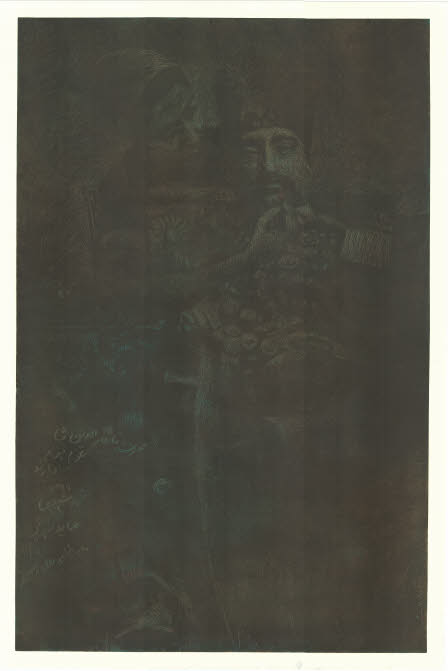 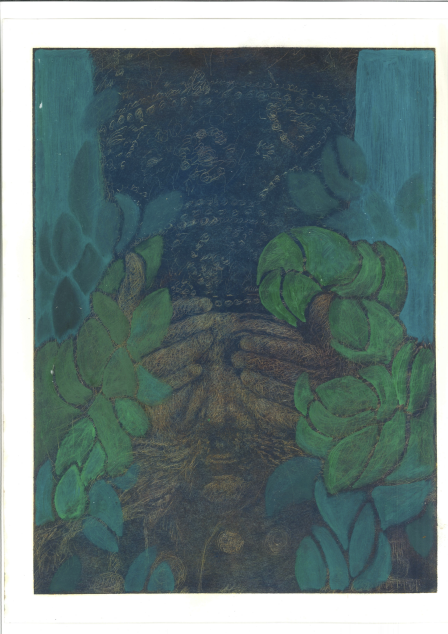 Painted based on a historical photograph. Mirza Ahmed Khan Ala al-Dowleh (1867–1911). The governor of Tehran who punished sugar traders and caused the demonstration of ordinary people which finally led to the Constitutional Revolution. 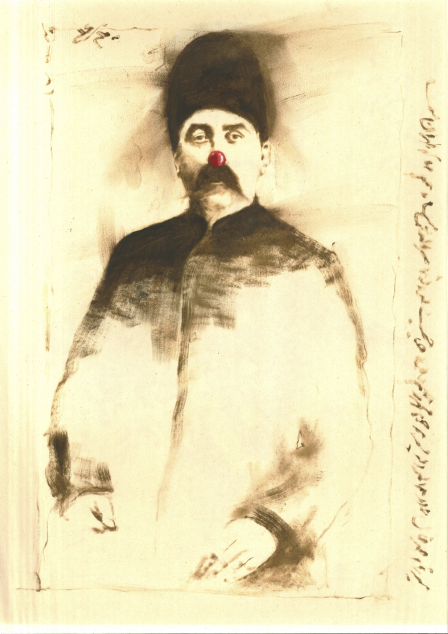 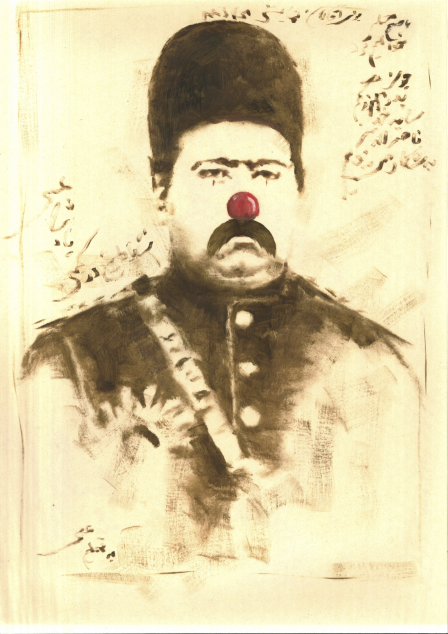 More about the art and artist

The artist attempts to open a new debate to revive the forgotten heritage and history of voiceless people through modification of historical photos and documents. He highlights the forgotten role of ordinary people in contemporary political movements by mocking the faces of dictators and adding symbols of voiceless groups of people: children, women, and villagers. These ignored groups are still faceless in his paintings, while through these colourful, common objects addressing a forgotten diversity, he stimulates us to recall victims of oblivion and ignorance. The artist’s subjects reveal the long-term ignorance of diversity, the manipulation of history, and the biased politics which affect the tangible and intangible heritage of the recent past. Drawing on his experiences of working with children and ordinary people, Ali brings to the forefront an interpretation of the past as a complicated, diverse, and even vague phenomenon.

Balloon Head is an artistic attempt to challenge the solid and frozen past produced by the conservative official historiography. Balloon Head calls for diverse understandings of the past, as multiple futures of heritage can be expanded through a communicative interaction not only with tangible heritage but also with absent, forgotten agents (historical and modern) who create, change, and interact with the past and with heritage.

He produces a scratched texture, as if time has distorted the voice and figure of the dictator kings. For the artist, these scratches demonstrate dissatisfaction with official history. It is impossible to erase this part of history completely, but we can fade and modify it by putting in ordinary people, colourful motifs, and even epigrams to reduce the violence behind the official narrative. Ali’s work scratches the face of historical androcentric metanarratives. Maybe behind the scratches we can see the faces of the people and things which have been disappeared or ignored in history. Hence, agents such as women and objects such as colourful balloons bring back diversity into the grey history of the Constitutional Revolution.

Ali does not strive to monumentalize his narrative of the past. He puts himself in his cycle of experience as one of the forgotten people in official history. Through these interventions, the artist attempts to question the monopoly of dominant classes on history and create a visual version of history which appreciates diversity and the presence of ordinary people like himself. Put together, these forgotten parts of history will fundamentally shape diverse futures.

Balloon Head reconsiders deeply ingrained memories and constructed ideals of the forgotten people who have been lost in history and easily erased from official tellings. Ali’s work shows that there is still hope of reviving forgotten history and replacing the ruling class’s monologue with a dialogue with the past. His paintings deconstruct reductionist history and give depth and colour to it. It is a promising interpretation of the past which invites audiences to rethink conservative readings of heritage and history which are usually empty of ordinary people.

Historical background of the art

In Balloon Head, the artist considers a special case, the Iranian Constitutional Revolution (1906-1911), a landmark in contemporary history of Western Asia. The idea of Iranian Constitution was gradually developed during the long reign of Naser al-Din Shah (r. 1848-1896), who was assassinated on 1 May 1896. As king, he travelled to Europe and imported archaeology, ballet, and cameras to the country. Interestingly, he is frequently called the photographer king. The Constitutional Revolution blossomed after his death and led to demonstrations by diverse groups of people during the reign of his son, Mozaffar al-Din Shah (1896-1907). The new king decreed a Constitution in 1906. Soon, the movement lost its momentum when the Iranian parliament was bombarded by a Russian brigade in 1908 with the support of the royal court and conservative forces. The decline of the Iranian Constitutional Revolution had a great impact not only on Iranians but also on diverse groups of revolutionaries in the region who had hopes of witnessing reform in one of the globe’s ancient monarchies.

After World War I, the dream of emancipation and integration, the most significant intangible heritage of the revolution, disappeared into history. Gradually, and after the rise of modern states in Iran, official history started to erase diversity from the history of the Constitutional Revolution. Women, secular intellectuals, African-Iranians, non-Iranian partisans, different ethnicities, peasants, and Caucasian guerrillas as active agents of the Revolution have been omitted from the official history.

Ali Roustaeeyanfard is an independent painter and photographer. Born in 1975 in Tehran, he received his BA in archaeology and art history from the University of Tehran. Ali started painting as a teenager and gradually enriched his artistic experiences through working with different materials, techniques, and subjects. History has always been one of his main concerns and he has often used historical photos in his work. Ali believes in ordinary people as the agents of history. In his historically inspired works, he challenges the dominance of the political elites’ history. Since 2018, he has been designing book covers, mostly in the realm of archaeology, cultural heritage, and history.

Ali has displayed his work in several individual exhibitions in Iran and participated in several group exhibitions in Iran and the USA. In 2011, he received an art residency fellowship from Art Omi Foundation in the USA. Since January 2021 he has been living in Heidelberg, Germany, where he spends most of his time fostering new ideas, artistic techniques, and innovative ways of artistic expression.