Facts about the project

Spruce bark beetles attack a spruce jointly, i.e. in a few days, thousands of bark beetles drill into a tree attracted by an aggregation pheromone, i.e. a chemical signal that the first arriving bark beetles send out to attract conspecifics. A collective attack is necessary, otherwise individual individuals will be drown in the resin flow that initiated by the trees defense mechanisms. The bark beetles also carry blue stain fungi with them into the trees. The fungi start to grow in the tree's vascular system and it helps to defend the tree's defense mechanisms and helps to kill the tree.

We have extensive spruce bark beetle attacks in Sweden, and it is important that new pest control alternatives can be tested and developed. A promising strategy is to deter bark beetle from the trees with the help of repellant pheromone components and fragrances from deciduous trees and then trapping them in pheromone traps. This "push & pull" technology has been tried in the US but not in Sweden.

In this project we want to improve the push part and lower the costs. Push means spreading repellents on vulnerable new forest edges that are formed after a bark attack. The bark beetles own repelling pheromone (verbenone) works in the US but not our bark beetle. We have discovered that the blue stain fungi that the bark beetles spread and that help them kill the trees give off chemical signals that seem to act as a deterrent to approaching bark beetles. We have analyzed these scents and seen that the bark beetle antennae react to some of them. We now want to test these physiologically active compounds for repellant activity by putting them in pheromone traps and see if trapping is prevented. In the third year, we intend to test whether we can protect standing trees against bark beetle attacks by putting dispensers with repellents on trees and leaving other groups of spruce unprotected. In the long term, this can be an environmentally friendly alternative or supplement to forest protection that can be applied by the small forest owner or on a large helicopter scale by forest companies. 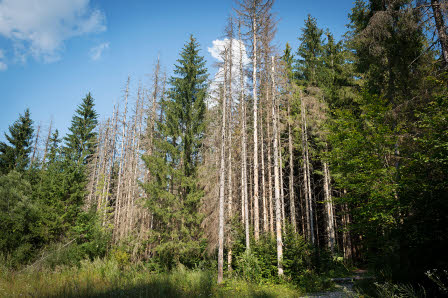 Typical scenario, around the clearcutting after infestation last year the over-wintering offspring bark beetles has attacked new trees in the nearby forest edge.
Previous Image Next Image 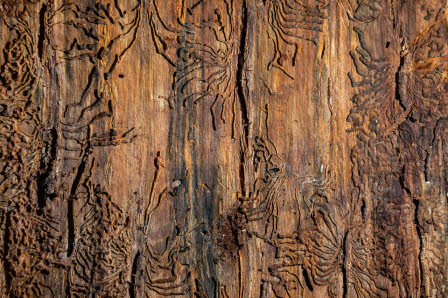 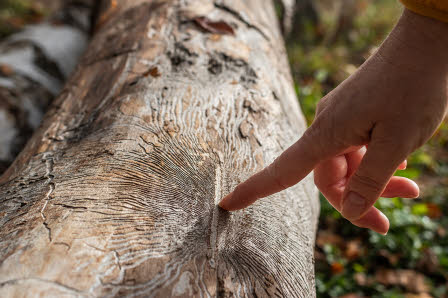