The project investigates the significance of the men and women 'on the spot' in the most intense wave of U.S. imperial expansion in the late nineteenth and early twentieth century. How did the encounters and relations between U.S. officers and other intermediaries in the frontier zones shape U.S. policies and the course of U.S. expansionism? How were conflicts handled by the intermediaries in the frontier zones and to what extent were personal relations crucial for imperial expansion and for the implementation of imperial policies, including 'civilizing' measures? 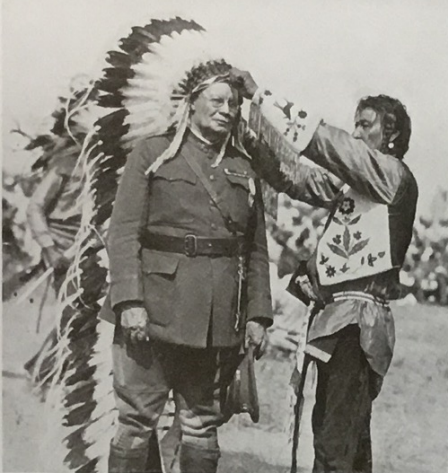 Hugh Lenox Scott is decorated by the Chief of the Mandan Indians during a visit to North Dakota in the 1920s.

The empirical investigation revolves around the imperial career of a U.S. Cavalry officer, Hugh Lenox Scott (1853–1934), who served on the American Plains, in Cuba, in the Southern Philippines and on the Mexican border. Renowned for his negotiating skills, Scott established friendly relations with members of the Apache, Kiowa, Sioux and other Native American Nations as well as with Cubans, Mexicans and Chinese and Muslims in the Southern Philippines. The sources to Scott's life and career thus contain the concurrent voices and perspectives of many intermediaries who represented non-U.S. groups in the frontier zones. In highlighting these voices the project challenges received binary oppositions between colonizer and colonized and provides a new understanding of the connected, contested, undetermined and mutually constitutive character of U.S. imperial expansion around the turn of the twentieth century.