Part of an initiative to apply a borderlands ("Swedish-American Borderlands," led by Dag Blanck, Uppsala University, and Adam Hjorthén, Stockholm University) concept to rethink Swedish-American relations over time and space, this project turns towards issues of border crossing, conceptual boundaries, margins and marginality, fluidity and multiple identities in order to investigate relationships, entanglements, and contention between Scandinavian and Swedish immigrants and American indigenous people (individuals and polities) who came into contact with one another as a consequence of American westward expansion. However, specific sets of notions regarding American Indians preceded the large waves of Scandinavian emigration from the middle of the 19th century and into the early 20th century.

This project ask how information spread back and forth across the Atlantic. What happened with it in this crossing, and as it moved into different channels? What significance did it acquire for different groups and individuals and how did that change over time and space? One example which intrigues me is the occurrence of (one of?) Captain Jack's (c. 1838-1873) riding whip at the Ethnographic Museum in Stockholm, as one of the museum's treasures. How did an object belonging to a resistance leader in Western United States end up in a glass case in Sweden? The riding whip seems to offer a focal point through which one may observe encounters between Swedes and American Indians, exchange of material objects, and the transformation of knowledge (news and background information) as the object moved from Nevada-California to Sweden. The whip appeared as a gift from the Swedish journalist Hugo Nisbeth following his travels in North America in the 1870s, and was mentioned in Swedish newspapers concurrently with reports from the Modoc War in which Captain Jack became famous first as a military leader and then charged with murder and hanged by the US government. Following the riding whip provides an entrance into specific exchanges between Swedish immigrants and indigenous leaders and contributes to clarifying the nature of concrete interactions. The news of the Modoc war, as it was reported in Swedish and Swedish-American newspapers, and descriptions of how the riding whip came to the Museum, reveals how a combination of political reporting and romantic ideas worked to shape notions of the Swedish presence in America, American Indian characteristics, and Swedish self-perceptions in a modern world. 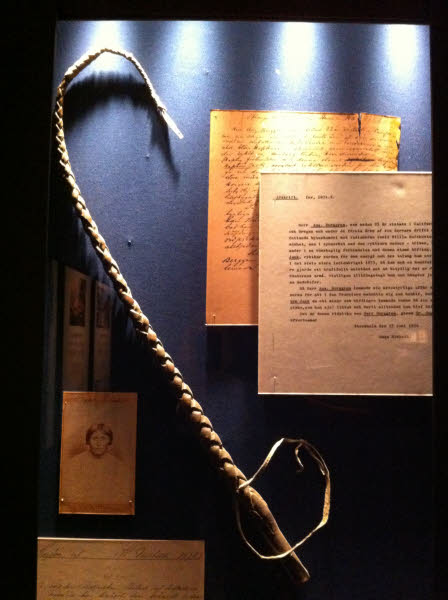