The mechanisms of muscle contraction – from molecules to sarcomeres to cells

Myosin II is a molecular motor that transforms chemical energy into mechanical work, with an incredibly high efficiency. When attached of actin, myosin produces force by changing its configuration to perform a, so called power stroke. Filaments containing many myosin motors and filaments of actin are perfectly arranged in units, sarcomeres, which in turn form myofibrils. Many myofibrils in parallel form muscle cells, ultimately responsible for muscle contraction. The molecular and cellular mechanisms of muscle contraction have been extensively investigated but there are still many uncertainties: (i) How does the myosin motor use the chemical energy to produce force during the power stroke, and how is it affected by load, (ii) How do emergent properties arise when many motors act together in filaments. Finally, (iii) how are myosin properties scaled in sarcomeres and myofibrils. Over the past years, we have developed several experimental systems to investigate myosin-actin interactions and muscle contraction and we are now deciphering unknown mechanisms. We have visualized the myosin power stroke in real time, directly measured the force produced by myosin motors in filaments and myofibrils, and have advanced our understanding of contraction. This talk will summarize some of these recent developments. 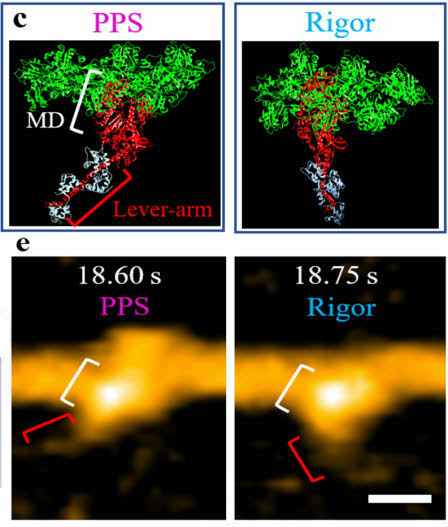 High-speed AFM images (bottom) of myosin motor bound to actin, compared to molecular model (top). The motor is shown either in pre-power-stroke (PPS) or in the post-power-stroke (Rigor) configuration. Scale bar: 10 nm.
9 apr 2021 13:0013:40 Via Zoom Alf Månsson Lägg till i din kalender