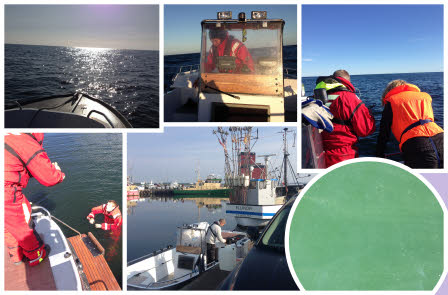 Transfer of vitamin in the aquatic food web

Some top predators in the Baltic Sea suffer from a deficiency syndrome thought to be caused by low levels of vitamin B1 (thiamine or thiamin). The vitamin is produced by bacteria and phytoplankton and is transferred by zooplankton to fish and birds. Thiamin deficiencies are intensively discussed in the literature and we need research to understand the mechanisms regulating the transfer of this micronutrient in the ecosystem from producers to consumers. Salmon in the Baltic Sea are periodically suffering from low reproductive output due to a thiamin deficiency syndrome called M74 and we use salmon and thiamin as a model system to understand micronutrient dynamics. 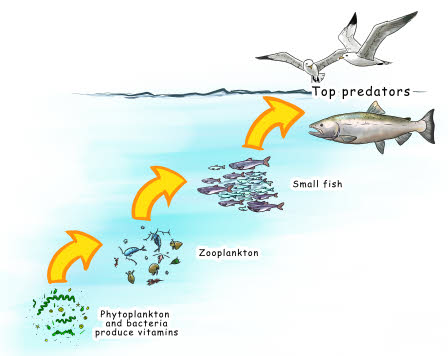 Floating mini-islands to retain and remove nutrients in wetlands

Eutrophication in aquatic ecosystems is a global environmental issue. Nitrogen (N) input from agricultural activities is one of the main reasons for eutrophication in freshwater and coastal ecosystems. In order to achieve sustainable agricultural practice and reduce eutrophication, it is crucial to retain nutrients in agricultural landscapes. Constructed wetlands along with different variants, e.g. constructed floating wetlands (CFWs), are now used to retain nutrients from agricultural activities. However, large scale in situ application of CFWs for N removal is not well studied and lacks use of environment friendly construction materials. We therefore study how constructed mini wetlands (CMWs), a type of CFWs made of eco-friendly materials remove N in constructed wetlands and at the same time promotes macrophyte biodiversity.

Exposure to ultraviolet radiation (UVR) leads to damage on DNA and other cellular structures. Zooplankton use a set of fascinating defense mechanisms to minimize these damages. The primary defenses we study are vertical migration and accumulation of UV protective compounds. Some taxa avoid the surface of the water column to reduce the exposure whereas other taxa accumulate so called photo-protective compounds. These compounds include pigments such as melanin and carotenoids and sunscreens such as mycosporine-like amino acids (MAAs).

Zooplankton increase their carotenoid pigmentation when exposed to ultraviolet radiation. Carotenoids are strong antioxidants which are thought to be beneficial to the animal. But pigmented animals are easily spotted by fish and are thus more exposed to predation. Martin Brüsin

How are communities affected by climate change?

There is little doubt that climate change is happening but we do not know how biodiversity, biogeochemical processes, and ecosystem services will be affected. The overarching aim of this project is to bridge current knowledge gaps regarding consequences for community composition and the ability of species to adapt and cope with increased temperatures associated with global warming. This project is in collaboration with Laura Seidel, Mark Dopson and Anders Forsman.

Seasonal sampling in the Baltic Sea

Within the framework of EEMiS (Linnaeus University Centre for Ecology and Evolution in Microbial model Systems) we sample in the Baltic Sea for vitamins and pigments once a month east of Öland, Sweden at a sampling site called the Linnaeus Microbial Observatory (LMO). A large set of background parameters are also collected from this site. 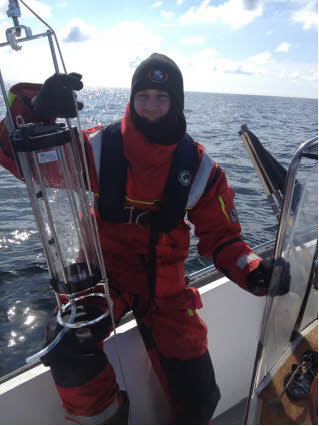 Field sampling on the west coast of Sweden

To compare vitamin and pigment production in different systems (marine and brackish) we also sample in The Gullmar Fjord on the Swedish west coast (with help of a scholarship from Sven Lovén Centre for Marine Sciences and KVA).

Seasonal variation in sunscreens and pigments in Arctic zooplankton

In collaboration with the Arctic program at DTU-AQUA (Copenhagen), Samuel Hylander participated in field trips with the research ship Porsild at the Arctic Station in Greenland during spring 2012. Samplings were performed over a spring-summer period and sunscreens in zooplankton were tightly correlated with ice-out and UVR exposure but the response was species specific (see publications). 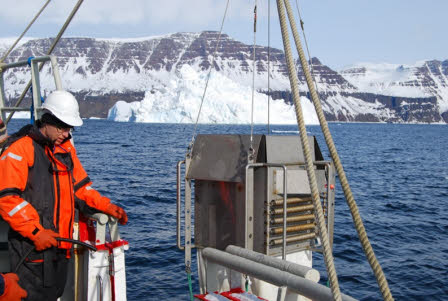 Samples during this expedition were collected from both freshwater and marine systems. Lakes with permanent ice in the Dry Valley area close to McMurdo, Antarctica were sampled for zooplankton and background parameters. Then marine field sampling and experimental studies were performed onboard the Swedish icebreaker Oden on its way from McMurdo to Chile. Among many results, data revealed a surprisingly high biodiversity of zooplankton in the Dry Valley lakes and efficient UVR-protective adaptations among marine zooplankton (see publication list). 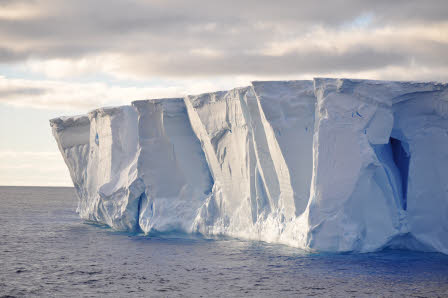 Iceberg off the coast of Antarctica. Samuel Hylander 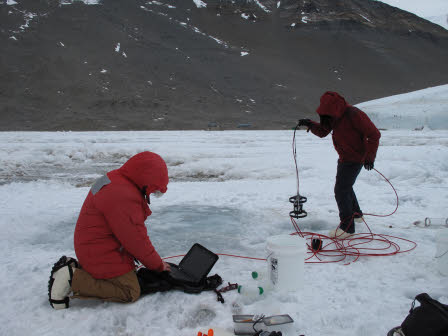 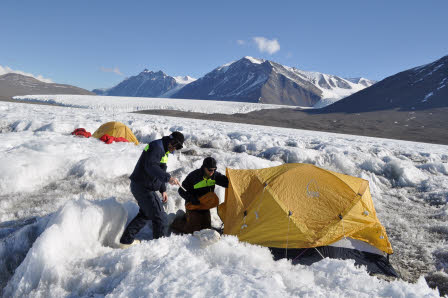 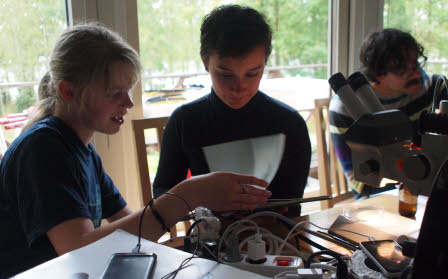 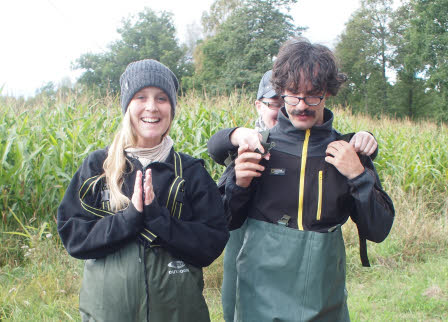 Freshwaters are under many kinds of threats such as eutrophication, contamination and water extraction. All over the world, clean water and flourishing lakes are environmental objectives of high priority. Linnaeus University has a strong profile in aquatic ecology with courses in freshwater ecology, marine ecology and fish ecology. There is also a master's program in aquatic ecology. During these courses we go out on field trips to study how aquatic systems function and are structured. During the freshwater field course we spend several days in a beautiful area close to Hultsfred where we study several streams and lakes.